My earliest memories of music are saturated by Fleetwood Mac, usually in a car on long drives at night. A few albums stick out but none more so than ‘Rumours’. My family holidays consisted of driving to France and onto Spain back in the 80s and early 90s, and Fleetwood Mac was a constant. Sometimes we went to the Monaco Grand Prix, and with ‘The Chain’ being on this album, and being the theme song to F1, it never fails to bring back some incredible memories of being a kid and being able to drive around the track at Monaco. This was of course before it underwent the huge commercialisation we see today where you can’t get anywhere near it on race weekend. 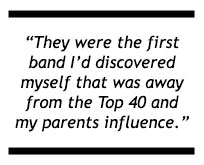 I was fifteen years old sat watching VH-1 and they had announced a ‘Madchester’ special music night. I was familiar with the term and that Manchester had produced some iconic bands over the years, but I was very unfamiliar with most of its music. This was to be one of the biggest nights of my education. The first song they played was ‘I Wanna Be Adored’ by Stone Roses and I just instantly fell in love and had to buy the album, especially when I realised that ‘She Bangs the Drums’ and ‘Waterfall’ were also on it, two other songs I’d heard and loved over the course of the evening. They were the first band I’d discovered myself that was away from the Top 40 and my parents influence.

I was late to the party on Oasis. When everyone at school was raving about Oasis, I was the odd one out who gushed over Stone Roses. But as I approached my late teens I finally got onboard, and it all happened on my first lads holiday to Benidorm. It was the ‘Definitely Maybe’ album that was constantly played over and over again that just energised us before we went out on the town. Oasis slowly overtook Stone Roses as being my favourite band, but that all changed a year or two later… 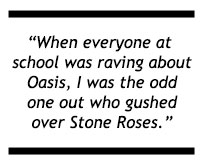 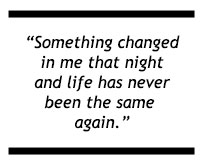 The Doors - Best of The Doors

Ok, strictly not an official album, but it was this particular album that meant so much. I accredit my time at Uni as the hub of my musical discoveries, none more so than the Doors. It was my first year of Uni and I was sat in my Halls of Residence and heard this slow, ethereal, psychedelic track rumbling from one of my mates’ rooms. I leapt up and had to see what this was. It was ‘Riders on the Storm’. I felt this weird connection and sat with him through the whole seventeen track album, completely immersed and blown away. Something changed in me that night and life has never been the same again. I bought the same album the day after and had it on constantly wherever I went. In Jim Morrison I found an idol. This was a love affair to last a lifetime. I became obsessed with the band pretty quickly, buying up their back catalogue, reading books about them and buying t-shirts to show where my musical allegiances lay. The Doors are to blame for the darker side of my mind, as well as expanding it beyond what I’d been taught in everyday life. I’ve since been to the grave four times and seen the remaining Doors play numerous times, including twice in Paris (one was the 40th anniversary of Jim Morrison’s death and the best gig I’ve ever been too) and bizarrely on a golf course in Portugal at a Sheraton Hotel. To this day they are still my favourite band and will never be replaced.

For me this is the only good Killers album and it happens to mean a hell of a lot. This was at a time when there was a surge in proper band music making an esteemed comeback to the commercial scene. We had Kasabian, Libertines, Kings of Leon, Snow Patrol, Coldplay, JET, The Music, the list goes on and is quite impressive, but it was this album that really struck a chord. Third year of Uni and I’d just split up with my first girlfriend. My roommate at the time told me about this new band he’d discovered, telling me to listen to their debut album, omitting the fact that the opening song is called ‘Jenny Was A Friend of Mine’, which is about a breakup…and guess what my ex was called? Correct! Despite the chastising I gave him, I was hooked on the album. A few weeks later we had the chance to see them at Leadmill in Sheffield for £3. I bailed at the last minute to go on a date. He’s never forgiven for me that. I also remember some of my friends ridiculing me for listening to ‘Mr Brightside’ when it was still an underground hit. Fast forward a year later and these same people were belting out the lyrics wherever it was played. Fickle or what? 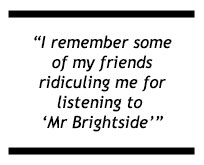 Post University was a confusing and difficult time for me as I struggled to adapt to reality, grieving for the loss of the institutionalised way of Uni life. Watching the the film, ‘24 Hour Party People’, at this time sparked my interest into Joy Division’s world. I think the darkness, profoundness and depth of each track mirrored my own mood at that time and I could fully relate to this album – even looking back, the album’s title, ‘Unknown Pleasures’ was quite pertinent once I came through the rocky road. Stone Roses and Oasis are bands from my youth that I associate with that freedom and exuberance. In Joy Division, I found a band I could relate to and adore more in adulthood, who I now refer to as my favourite Manchester band.

A few years later after discovering my own unknown pleasures, I started writing reviews within music. I’d done quite a few and although I liked some of the bands I saw, there wasn’t that thunderbolt where I was instantly hooked and constantly listening to someone’s work. That was until I came across Manchester band, The Rubys. I can’t put my finger on what it was but this whole album just really bowled me over and was the first album from an underground band that I loved every single song on the list. A hard band to pigeonhole though – just a great band. Similar to how you’d characterise bands like U2 really. I was fortunate enough to become good friends with them too and it reminds me of my early affiliation as a reviewer, a fantastic time. Unfortunately, The Rubys split up, but that’s not to say their music doesn’t live on.

I think this brings me to where I am musically today in my preferred tastes in many respects. I’m getting heavily into the new era of American blues, roots, country, psych etc, and Israel Nash embodies that. It’s not that long ago that I discovered him, an incredible artist from Texas, who infuses all the genres named above, sparking a range of emotions and vivid imagery of desert drives and mind-bending landscapes through his wonderfully crafted writing. ‘Rain Plans’ was the first album I’d heard from him and it’s his fourth. Since then I’ve bought all his work and have to say all the albums have been listened to constantly – one of the rare artists in this day and age to have that effect on me. His new album, ‘Lifted’, is another impressive collection of cool, emotive, deep south craftmanship that whisks you away to a place in your mind you didn’t know existed. In ‘Rain Plans’, it’s something beautiful and psychedelic and the song title of the same name is the standout out one on the record.

Born and raised in Manchester and heavily influenced by music, film and literature, I’ve aspired to work in and around the creative arts since my teenage years. I was fortunate enough to be given the opportunity to write reviews for a few different music magazines when I hit my late twenties, and my involvement progressed from there. I co-hosted and ran the Sonic Bandwagon radio show on Stockport radio station, Pure 107.8FM (the online presence is still alive today) and still write reviews via the site to this day. From there I have since penned my debut novel called, ‘Lost in Manchester, Found in Vegas’, which is filled with music from the past that acts as a soundtrack throughout. You can find the book on njcartner.com or via amazon. Check out the blurb and reviews. I’ve always been someone who’s background music education has stemmed from Greatest Hits and individual songs as opposed to albums, and I’d usually delve into back catalogues from there. From being a teenager I used to make mix tapes, which then extended to creating CD compilations and then onto different playlists on iPods, which is usually how I listen to music these days and probably why I ended up being a broadcaster, so I could put together great music for people’s enjoyment. That’s not to say I don’t buy or enjoy albums. Given my position as a music reviewer over the last ten years I’ve had the pleasure of listening to many albums from newer, alternative artists and I would probably say I listen to more newer albums these days than those from a past generation, despite my love of several bands from that era. As with the aim of Eight Albums, the list above are albums that have soundtracked my life’s journey that carry a personal connection and story as opposed to what could be considered the best albums of all time. 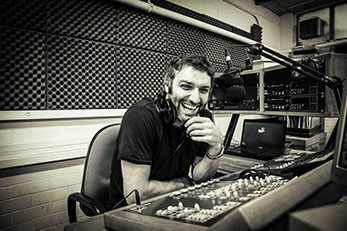