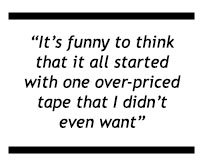 Take That - Take That and Party

This is on the list because it’s the first album I ever owned. My dad bought it for me on cassette from Jack Blairs – a specialist Navy shop in Portsmouth where sailors had the privilege of getting royally ripped off when buying extortionately-priced stuff on credit and racking up a load of debt because of the interest.

I wanted the album because I was obsessed with Could It Be Magic, and watched the video about a thousand times a day on The Box and VH1. I was ill one day, and my dad came home with this tape for me and it felt like all my Christmases had come at once. Unbeknown to me (and to him) Could It Be Magic didn’t actually feature on this album. Fun fact: it was only ever released as a CD single. I was devastated, and I probably didn’t hold back in showing my ingratitude, which now makes me feel very guilty.

I got over it, obviously, and Take That became the love(s) of my life for the next five years. I knew every word to all of their songs, I had every album, every annual, every photo card in the collector’s pack, and my bedroom walls were plastered floor to ceiling with posters of their greasy, beaming faces. When I think back to my childhood, so many memories are associated with my Take That obsession. It’s funny to think that it all started with this one over-priced tape that I didn’t even want.

My sister had this album when it first came out in the mid-nineties and I remember she listened to it, loudly, with her bedroom windows wide open during the long, hot summer of 1996.

I enjoyed it at the time, but I was quite young to fully appreciate its brilliance and significance, and it wasn’t until about five or six years later when I had my own copy that it became one of my favourite albums of all time. It is the perfect album to be played loudly, and I can still belt out every single song lyric nearly 25 years later.

Alanis Morrisette was the first woman I came across who didn’t write vacuous, soppy love songs. Instead, she sang about religion, politics, mental health and standing on your own two feet, as well as unapologetically referencing all the anger, bitterness and jealousy that come from falling in and out of love and being hurt by people. That hidden track is still one of the most brilliant things I’ve ever heard. She was a hero to me for writing this album.

This band writes the ultimate break up music for heartbroken teens, and you bet I changed my MSN status to each and every one of their angsty, emotionally-charged song titles when the love of my (then) life dumped me, circa June 2001. I’ve grouped the two albums together, because I listened to them interchangeably and on repeat for months (not to mention illegally downloaded from Kazaa) to the point of not really knowing which songs were on which album.

We’d mutually broken up in our final year of high school, after being together for almost three years and the break up was temporarily quite exciting until he got a new girlfriend and my poor teenage heart experienced a new kind of devastating hell. His new girlfriend was cool and mysterious because she went to a different school, and darkly pretty in a noughties ‘emo’ sort of way. I was insanely jealous of her very existence. I’d watch him wait for her at the bus stop after school, and then I’d go home and write some poetry about it whilst listening to the Ataris.

It was perfect torture material, with songs like Giving Up On Love, Bad Case of Broken Heart, Life Makes No Sense and The Last Song I will Ever Write About a Girl, as well as deeply romantic numbers like Summer Wind was always our song and Your Boyfriend Sucks. There truly was a song for every emotion.

The most insane thing about all of this was that I knew through mutual friends that these albums were a collection of ‘their’ songs. I was essentially persecuting myself with a soundtrack of love songs that they were simultaneously singing to each other and composing mix tapes from, imagining that he was wistfully singing them about me! Talk about tragic! But it no doubt helped me to write some very good poems. Probably.

I used to say that the Smashing Pumpkins were my favourite band of all time. This was categorically not true, but I committed to this being my steadfast answer whenever anyone asked me the question because they were cool enough for people to be suitably impressed, but obscure enough amongst my circle of friends for no one to quiz me on their complex discography.

The truth was, I liked this one album because (yep, you guessed it) I once had a romantic moment with a boy at Jilly’s Rock World in Manchester while Disarm was playing, and I became obsessed with it. I bought the album (actually bought it; I didn’t even download it for free) and joyfully discovered that the Smashing Pumpkins weren’t all heavy metal and angry guitars, but that they actually made some really beautiful music. This album is wonderfully morose and grungy and takes me back to 2001 – 2003 when all-nighters at Jilly’s were life. I’d spend the money my parents gave me for a taxi home on Pernod and lemonade and get the night bus home for a quid. Talk about living the dream. 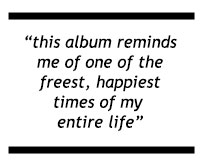 The Kooks – Inside In / Inside Out

It pains me to say this (mainly because my husband has poisoned me against The Kooks over the years because of his irrational hatred of them) but this album reminds me of one of the freest, happiest times of my entire life.

I bought this album when I was in my third year of university in Bangor, and I starting telling everyone about this brilliant new song called Naïve. I couldn’t stop playing it. My final English exam happened to fall on the morning of my 21st birthday, and when it was over, my four housemates and I sat in the front garden sharing a picnic and a bottle or three of ‘Good Spanish White’ from Morrisons which cost about £2.99. I put this album on, and we stayed there until it got cold outside and the wine ran dry.

My birthday is the beginning of May, and we didn’t have to move out until the end of June, so when I sat there in the sunshine with four of my best friends, all I could see ahead of me for the next five or six weeks was more of…this. I had nothing I needed to do, nowhere I needed to be, no exams or dissertation to work on. It was no doubt the lightest, freest, most liberated I’ve ever felt. I’d pay good money to experience that again.

The Libertines - Up The Bracket

It’s hard to put into words what this album means to me. Its brilliance has spanned a good seventeen-year period of my life, and it makes me think of so many good times with so many of my favourite people. Driving around South Manchester with Time for Heroes blaring out, when we first had the freedom to drive; Indie nights with college friends in Manchester’s Fifth Ave and 42s; and years later in London’s Border Line and Nambucca with my husband, staggering out at 3am and catching the 29 bus home. Every wedding disco, every festival, every gig. So many songs from this album created the perfect soundtrack for all of that.

I’ve seen the Libertines and Pete Dougherty play more times than I can count on both hands (as well as bumping into him in an antiques shop at the end of my road) and it was always anyone’s guess as to whether it’d be the best or worst gig you’ve ever seen in your life. It could have easily gone one way or the other; we all knew what a car crash it could potentially be but that was part of the excitement. You might wonder why anyone would bother giving them the time of day anymore. Why keep buying their music and paying for gig tickets when you’re not even sure they’ll show up? Well, for me, and a lot of people my age, we owe them big time for this album. It’s hard to imagine the last seventeen years without it and for that, we’ll always keep going back for more.

Maccabees - Colour It In

I met my husband at Leeds festival in August 2010, and it was several months later when he first came around to my flat. I’d given a lot of thought to what album to play whilst he was there, and decided upon Colour It In by the Maccabees, which I’d recently bought. He hadn’t heard much of their music and seemed to really like it, which I felt like was a good seal of approval coming from a big Indie music fan.

We listened to the album a lot together over the next few months, and when I discovered that he’d bought his own copy, I considered them ‘our’ band and concluded that I had officially won his heart once and for all.

One of the songs on the album is called Precious Time and it seemed to fit us perfectly because of the line ‘Let’s take our precious time about it’. Not only did we do everything in our daily lives at a very leisurely pace, but we took our precious time with our relationship too. We took everything slowly: from arranging our first date, to making things ‘official’, to living together (in the same city, let alone the same house), a long engagement followed by a wedding, and we now have a baby on the way a mere nine years later. Not rushing worked out well for us, and I’ll always think of him and that exhilarating initial period of getting together when I hear that song. We also chose to play the bonus track from this album, Toothpaste Kisses, during our wedding ceremony. For me, it’s just the sweetest love song.

This album (and St Jude) reminds me of the majority of a two-year period I spent going up and down the country on a Virgin Pendolino. I lived in Manchester and my (then) boyfriend, Rene, had moved from Chester to London, and every other weekend was spent in one city or the other. I was always a little un-savvy with technology and even in 2011 / 2012, didn’t have my own iPod or smart phone that played music. Rene gave me his old iPod which had only a handful of albums on, two of which were these. I listened to the Courteeners pretty much every single journey (I didn’t know how to put new music on!) and so many of the songs seemed to relate to us because they referenced London and Manchester. The two places were very significant because we really needed to pick somewhere to live if we were going to make a proper go of things. I wasn’t sure if things were going to work, and lines like ‘I need life more than I need a wife’ made me wonder if that’s what he was thinking. If you’ve ever been in a long-distance relationship, you’ll know that it’s really, really tough but if it’s meant to be, it’ll take more than a few hundred miles to keep you apart. Spoiler alert: we’re married now. But he never did meet me at Euston with a heart shaped balloon.

Katy Rigg is 35 and lives in East London with her husband and son. She is a primary school teacher by trade but also writes a blog, which you can read by visiting www.amileinmyshoesblog.co.uk She can be found on Instagram with the handle @amileinmyshoesblog 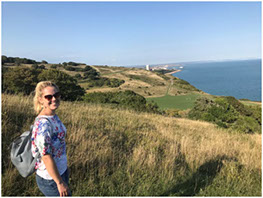 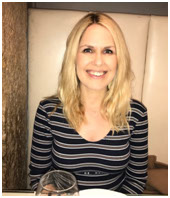