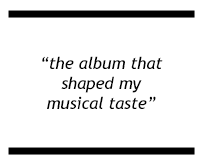 This is the album that shaped my musical taste in those formative teenage years. The bus journey to and from school would be spent listening to the poetry from Kurt Cobain supported by crashing drums and wailing guitars. This was the first time music spoke to me and it still does.

Almost thirty years later (and that statement just scared the life out of me) it is still rightly recognised as a critical piece of modern art. The best thing about this album is its timelessness. My 18-year-old daughter was streaming her playlist in the car with me and a few tracks from the Nevermind album came on, it felt like I was listening to it for the first time all over again and that felt magical.

As a teenager with plenty of frustrations building RATM helped me harness that angst in a truly blistering debut album. Deep, deep bass rocking anthems, accompanied by guitar playing wizardry, and a show stealing front man laying down an endless supply of powerful thought-provoking protest poems. Industrial, rap, funk metal has never been able to scale these heights before or since. This music with a message has been part of the industry from Woody Guthrie and Pete Seeger to Springsteen. That social message has remained constant, it’s just the delivery that changed with RATM and it left me shaken to the core. Still a critical album for any playlist.

The Pogues - If I Should Fall From Grace With God

My brother was a folk singer in Glasgow for over 25 years going on to huge success in North America as part of the Celtic Thunder group. Growing up in a room with three older brothers it was easy to fall in love with the music they were listening to, and none more so than The Pogues. Incredible writing and musical arrangements make The Pogues one of the great album and live bands. If I Should Fall From Grace With God displays absolutely everything that made the folk rockers one of the biggest and best bands of the 80s. Touching, emotional lyrics sewn together with punch-the-air folk rock - just perfect.

The disappointment of missing out on seeing Nirvana perform a live set was tough, but with all things in music, the industry keeps changing and the next big things are only a song and break away. The Definitely Maybe album is a sliding doors moment in music, the shift from American grunge to Brit Pop happened over a few months in 1994. For me it corresponded with leaving school, starting work and investing in a season ticket for Celtic football club. Music, working and football have remained a constant since. I was fortunate enough to catch Oasis at the Glasgow Barrowlands twice as part of the Definitely Maybe tour, I doubt anything will ever come close to hearing Rock and Roll Star from a band ready to take the world by storm.

The Rifles - No Love Lost

Back in 2007 in a bid to take in more live music my oldest brother and I would pick a different gig every eight weeks or so where we would pick a band to go see. I spotted The Rifles were due to play the Queen Margaret Union in Glasgow, I had never heard them but there was something about the advert that screamed The Jam. I heard a few tracks from YouTube and was hooked. By the time the concert came round, we had rounded up another eight folk to come along to the gig. As a live band, The Rifles are as slick and close to the album as I’ve heard. Their debut album, No Love Lost, is a modern classic with more than a gentle nod to the mod-tastic hits from the Jam and Style Council. Even now when I go see The Rifles live, I am picking up tickets for my daughter and nephews too.

This album captures a perfect moment in time for me. My wife worked on a Saturday and that meant daddy daughter day for me and my eldest child. This would normally be something like a trip to the petting zoo or farm, maybe a picnic, visiting family or a book reading session at a local book shop. At one of the book readings while the member of staff was reading The Gruffalo to the kids I could hear an album in the coffee shop behind us, it must have played on repeat two or three times. When the reading session finished I walked over to the coffee shop and asked what the album was. When they told me it was The Fratellis and Costello Music, I made my way to the next record shop and bought the CD.

The CD was played in the car wherever we went, so much so my daughter would sing along at the top of her voice from her car seat in the back of the car. Special memories. 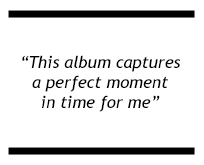 After hearing rave reviews about this band from an old school friend I listened to a few of their tracks on YouTube and I was absolutely hooked. Fortunately, enough for me the band were due to play a gig in Glasgow just a few weeks later. I picked up tickets for my wife andI for the show at the Record Factory, and it had been a long time since I saw or heard a band play with such energy and passion.

The mysterious shamen led masked combo simply blew the roof of the small venue with an intoxicating mix of electro funk bass lined riffs. The debut album from the Glasgow quartet is a powerful heady mix of techno rock with a real edge. Definitely one to dip your toes into. 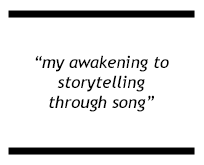 I can still remember walking into HMV on Union Street in Glasgow and picking up a copy of this CD. There seemed to be a natural progression from one Seattle grunge band to another and I will be honest this was a slow burner for me. I must have been about 15 or 16, still at school and hoping that this album would have the same anthem feel as Nevermind from Nirvana but it didn’t have the feel right away. It wasn't until I left school and was making my way in the working world that this masterpiece started to grip me in a way very few have.

This album was my awakening to storytelling through song. I still love the buzz of listening to crashing anthems, but lyrics and musical composition on Vs opened up a whole new world of music from the likes of Bruce Springsteen and Johnny Cash.

Born with a serious congenital heart defect resulting in a number of life saving and life changing open heart surgeries, he now dedicates a lot of his free time to fundraising and supporting the British Heart Foundation and the Celtic Foundation, two charities who help to change lives locally & globally.

The youngest of nine children, Martin has been listening to an eclectic mix of music over the years ranging from Louis Armstrong to Metallica and The Shamen to Christy Moore. 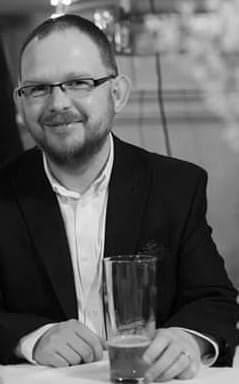