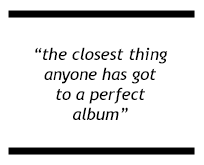 Bowie has been in my life since I was ten and Bowie was the Goblin King, and we've grown together over the years. From watching grainy videos of Ziggy in my early teens and diving down the front for his legendary Phoenix performance during his wonderful mid 90s resurgence, to trying to impress bemused female art students at MMU by scoffing at the hits and insisting they sit down with me to listen studiously to the second sides of Low and Heroes, and crying like a baby at the Lazarus video in 2016. He’s been a constant presence in my universe, has Bowie.

Picking a favourite Bowie album is like picking a favourite child, but Station for me is pretty much the closest anyone has got to the perfect album. It's possibly his most eclectic record, covering more ground across seven tracks and 37 minutes than most artists manage in their whole career, yet it hangs together perfectly, switching from experimental noise to raunchy rock and roll to perfect pop to footstomping motorik to gorgeous wind-swept ballads. There's not a hair out of place or the slightest mis-step on that album, yet he was in such an advanced state of mental collapse during the sessions he later claimed to have no memory of making it.

The Beatles - Let It Be

The first record I remember buying with my own money (the second half of that sentence conveniently allows me to pick the Beatles and not Kylie Minogue, which my mum bought me). The Beatles were without doubt my first great musical passion. I can still close my eyes and remember the first time I heard those piano chords of the song itself, sitting in my bedroom listening on headphones in the dark and feeling that first ever rush of emotion that music could affect me this way. Magnificent though the title track is, it's a great album all round, never seems to get much love from Beatles fans but there are lots of gems, from Paul's charming Two Of Us to John's gutsy Dig A Pony as well as several really big hitters.

For years the accompanying film – the one they didn't want us to see because of all the bickering - eluded me and I finally saw it in my late 20s when I'd been in Anna Kashfi for the best part of a decade. I was a bit taken aback - we'd bickered like that from day one, I thought it was just how bands were! I wonder, looking back on it, if I wasn't the greatest person to be in a band with...

Bach was my Dad's big musical passion: it was always on in his car and it gradually started to rub off on me. He's one of those rare creative figures in history who seems to exist completely on his own plane way above the rest of civilisation and, half a millennia on, everyone is still playing catch up to him.

I was classically trained as a violinist and it's the solo violin pieces I always go back to. As a string player it feels as though he had a complete disregard for the limitations of the instrument, he just wrote the things as he heard them and expected violinists to figure out how to rise to the challenge - and they've been challenging the very best violinists for centuries.

I've picked Alina's recording of them largely because of a performance as part of an International Arts Festival art installation by the Quay Brothers, where she performed the D minor Chaconne in a tiny space in Chetham's Library in Manchester with visuals by the Quays and made every hair on the back of my neck stand up. I don't think anyone plays Bach better than Alina, she has an incredible sensitivity to the pieces where she lets the composition take centre stage.

My Dad now lives in the US and, whenever I visit him, he still has Bach on in the car.

Bette Midler - The Best Of Bette

Ok, this is an odd one for an indie kid! I can't for the life of me remember why I bought this, it was a charity shop cassette and it might even just have been the cool art deco artwork. But it's a wonderful record: aside from a powerful set of lungs, Bette Midler has a really great knowledge and passion for the American songbook encompassing everything from music hall to cutting edge rock and her song choices, from stunningly evocative readings of the Carpenters Superstar to coaxing Bob Dylan into a rambunctious duet of Dylan's Buckets Of Rain are fantastic. The real stand out though is another Dylan song, an extraordinary take on I Shall Be Released which starts with a beautifully elegiac piano (played by Barry Manilow, fact fans) and builds into a phenomenal torrent of free form vocal riffing - a perfect example of how to own a cover.

It's a very good album in its own right, but the reason it's in my eight is the number of artists I went looking for as a result of it, from John Prine to Phil Spector to Glenn Miller to my lifelong adoration of Bob Dylan, it all stemmed from that one charity shop cassette. For that I'm eternally grateful. 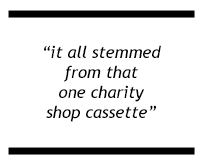 Up to the age of 16, music was something I was deeply passionate about but I always had the nagging sense that maybe I'd been born into the wrong era. I loved the Beatles, Dylan and Bowie but they were my parents’ generation and they didn't say anything specific about my life - who was going to speak up for my generation? Then came the annual industry snoozefest that was the Brits 1993: the NME had bullied the Brits into booking their new favourite band at the last minute, and the old guard found itself facing off against the new. Suede turned in a magnificent, confrontational performance that went down like a lead balloon, an audience shot at the end revealing that much of the audience weren't even bothering to clap, but for me, transfixed to the television, this was my Sex Pistols on Bill Grundy moment - I didn't quite know what I just saw, but I knew which side I was on. Suede gave me a sense of identity, an opportunity to pull myself up from that weird kid trying to blend into the corner of the sixth form common room, into someone who was proud to be different, and they were pretty much at the heart of everything I did in that era: from painstakingly transcribing every last note of Bernard Butler's extravagant, spider web guitar arrangements to pulling on my best charity shop blouse and nervously striking out for London to attend their legendary annual fan-club gigs.

There are many great Suede records, from the towering Dog Man Star to 2018's fantastic The Blue Hour, but I've chosen this round up of B sides over a studio album because, like the Smiths before them, a new Suede B side was every bit as exciting as a new album with treasures like To The Birds, High Rising, Together and WSD amongst their best songs.

Electronic music is something that's always been close to my heart. When I was a student, I was obsessed with all things indie but a lot of my friends were ravers, so if I wasn't at an indie gig there was a good chance of me ending up in a field listening to happy hardcore, and I started to explore various genres of dance music. Of all the EDM genres, drum & bass is the one I always felt most affinity for, and I was obsessed with Goldie's Timeless when it came out.

Timeless is a great example of superior EDM, it's complex and constantly modulating breakbeats as fascinating to me as trying to unravel Johnny Marr or Bernard Butler's guitar arrangements, but what I love most about it is its use of ambient space within the tracks - it's such a great record in terms of creating a world that it inhabits and that's something I've always tried to recreate in my own music.

The other thing I love about Timeless is, when I hear it now, I immediately think of driving around Manchester at night with it blasting out of the stereo, and I love it when music can do that to you.

I was lucky enough to stumble on Sparklehorse fairly early on in their career when they opened for Mazzy Star in the mid-90s and they became one of the bands I saw most over the years. I love Mark's voice so much, such a fragile thing that suited the songs so perfectly. Like Timeless, Sparklehorse had a huge impact on me as a musician in terms of how I thought about arrangements – they were my first exposure to the concept of lo-fi and how using sounds that are degraded and distorted can be far more evocative than crystal clear versions.

Mark's death in 2010 broke my heart – he was such a great talent and a good soul. He shouldn't have gone the way he did.

There's something about your early musical discoveries that's very special, that overwhelming feeling of hearing a sound that unlocks an emotion you've never felt before, and as we age it's rare to get that same feeling - we've already absorbed so much and heard so many variations on ideas that the chances of finding something really, genuinely new that touches us in a way we've not been touched before becomes much smaller.

Caligula was a timely remind then, that it's still possible to have those moments, and it hit me like a brick when I first heard it in 2018: a violent, challenging study of abuse and the legacy it leaves its victims that draws on everything from 14th century choral music to thrash metal to paint a lurid and graphic impression of its subject. There's a quote in an old art book of mine that I love, that a great artist doesn't hide from the darkest corners of their psyche but peers with curiosity into the void, and Caligula always brings that quite to mind: it's a brave attempt to articulate feelings of buried anger and frustration few would want or dare to make public. It's a tough listen as the narrator confronts her abuser and her demons, with every musical note designed to push the listener out of their comfort zone - the climax of Do You Doubt Me Traitor, with Kristin repeatedly screaming the line 'how do I break you before you break me' over a funeral violin before the track disintegrates into chaotic noise has to one of the most painful things I've ever heard on a record.

It's music as art rather than enjoyment but something about this record that moves me like nothing else that's come before it - a true modern masterpiece and surely one of the best heavy records ever made.

James Youngjohns is the guitarist in Lammergeiers and for songwriter Matt Hill, and previously played in Anna Kashfi and Last Harbour. He also sells and repairs musical instruments and lives in Manchester with a cockatoo and more guitars than is strictly appropriate for one person to own.

Lammergeiers can be found at lammergeiers.bandcamp.com and on streaming services. James's guitar related stuff is on Instagram as James Youngjohns 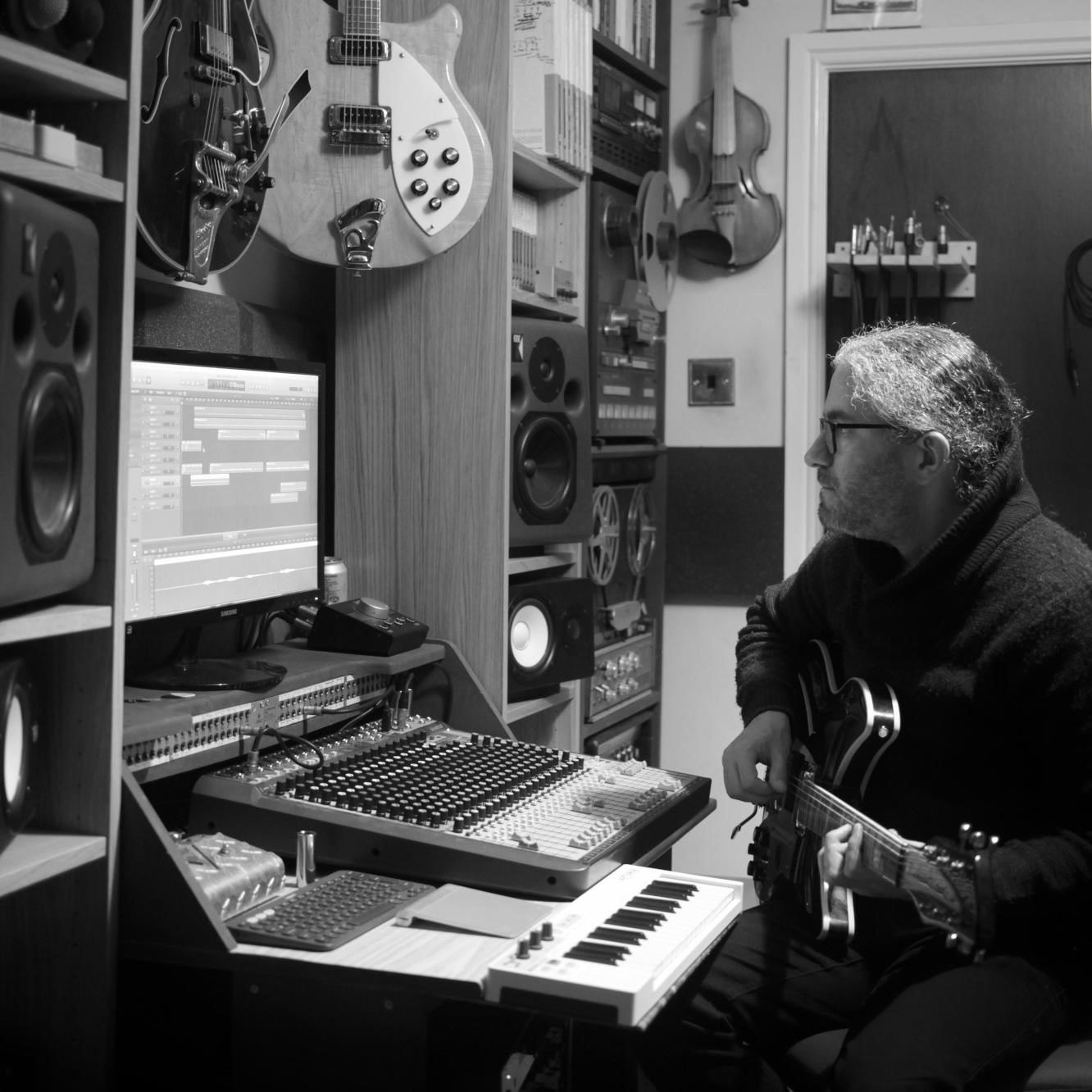