This is a double album that not only speaks volumes about the kind of artist that Dylan is but is really the album that kickstarted so much for any British music fan too young to enjoy the ‘60s. The cover is a cropped picture from the Concert For Bangladesh with George Harrison missing, so there is a look of a live album. The blue colouring is reminiscent of a Johnny Cash album and oh, by the way… it is isn’t really a greatest hits album!

Released in 1971, it impacted on music fans outside the US (where it was called the slightly less romantic Volume 3). It has half a dozen re-recorded tracks and a never before heard live track that Dylan would dangle and then never put out on a studio album (it took Elvis himself to record Tomorrow Is A Long Time and give it some well-deserved airtime). Even 50 years on this album remains simply the best introduction to Bob Dylan. It was certainly the introduction to a life of Dylan for me... oh and also a fan in North London called Marc Feld who changed his name to Bolan in honour of Bob.


It has been very well documented that in all the over blown, kitchen sink and orchestra production of Sgt Pepper and Pet Sounds in the late ‘60s, Dylan took himself in to a studio with a couple of the world’s finest musicians and made a pared down, biblical response to the wrong road that he felt popular music was taking. Turns out that, as in pretty much every case, Dylan was right, and his back to basics approach prevailed and we didn’t have a path which took totally the George Martin/ Brian Wilson orchestra plus assorted flamingoes approach.

John Wesley Harding IS one of the greatest albums ever made. In ten tracks Dylan takes you to the very soul of a biblical underworld, takes you down and down into a raw but pure cavern. Deeper and deeper until just as you feel you are slipping; he brings us back up in a lift playing joyous redemptive songs. He so nearly took us all with him. 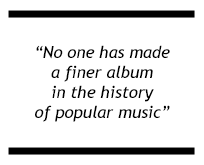 
The album kicks the door in with Like A Rolling Stone and ends with Desolation Row via Ballad of A Thin Man. Interesting that Bob should use two of the ‘filler’ tracks, Tombstone Blues and Queen Jane Approximately, to reimagine the excellent, recent Shadow Kingdom. There are no fillers really on Highway 61 Revisited.

No one has made a finer album in the history of popular music. That is all anyone needs to know.

Pink Floyd- Dark Side Of The Moon


An album that begins and ends with a heart beat. An album that spent 893,693 (give or take) weeks in the Album Chart. An album that only has a beginning and an end. If you ever visit the home of Crystal Palace FC, at Selhurst railways station there is an abandoned piano. After a few beers, Ian Waghorn will provide a beautiful introduction to ‘The Great Gig In The Sky’ (video available on Twitter)

You don’t need drugs to enjoy Dark Side of the Moon.


A lot of the time I am not interested in anyone covering Bob Dylan songs (although I would suggest that All Along The Watchtower by Bob and Jimi is the only moment in musical history where the original and a cover are BOTH classics). I mean Dylan’s cover of The Boxer is a real low point.

However, when Dylan delves back into musical history, folk, the Blues, he knows as much as any major artist about musical roots, his interpretations are sublime. Everything comes together so beautifully on World Gone Wrong.

This time features heavily in my book ‘Bob Dylan in London’, the cover picture was from Camden and the video to the song ‘Blood In My Eyes’ (one of his finest videos since Subterranean Homesick Blues at the Savoy Steps) is a part of a legendary Camden walkabout. The album became the backdrop to the most interesting tales and chapters in the book.

It is an album more people should listen to. Many more. 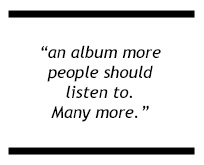 
For a brief time in the ‘80s and in a number of Kevin Rowland incarnations, this band ruled the world… and then they were gone. This album is a joy from start to finish. They were on a musical mission: get in, get out. I am told that the moment Geno went to Number One in the charts, Big Jimmy quit the band. 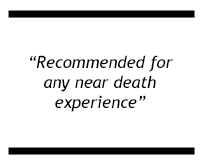 Bob Dylan- Time Out of Mind


This album was a kind of comeback for Bob. A resurrection after illness and a time he thought he might die. A year ago, I caught Covid and for three weeks things weren’t good for me. I listened to Time Out Of Mind and I also contemplated life. Like Bob, I came through and this album helped us both. Recommended for any near-death experience.


Bob can do joyful too.


KG Miles is the co-author, along with Jackie Lees, of the Amazon Number One Bestseller ‘Bob Dylan In London: Troubadour Tales’ and co-curator of the Dylan Room at The Troubadour in London (where Dylan first played in 1962).

Writer and presenter on all things Dylan related, the new Troubadour Tales book ‘Bob Dylan in the Big Apple’ is published in November. 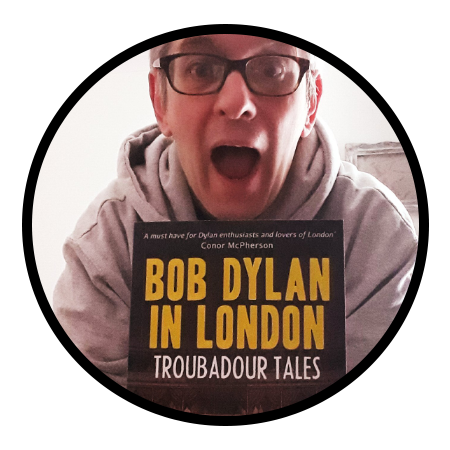