Travis - The Man Who

I can’t possibly attest to be the world’s BIGGEST Travis fan. However, this WAS the very first album that I not only bought with my own money, but the first album that I went to the shops to buy alone. A bright-eyed 13-year-old Jonathan went toddling to HMV on Buchanan Street thinking he was all grown up.

To be perfectly honest, I don’t have any strong feelings for or against Travis or this album. Which I suppose is a fitting epitaph for the band as a whole. While I acknowledge that they are THE post-Britpop/indie rock Scots band of the late 90s/early 2000s - they were never really my bag.

But, as is always the case when you’re a blossoming teenager, you’re swayed by peer pressure. This album was EVERYWHERE - as were the band themselves. And I recall there were an awful lot of Fran Healy haircuts kicking about.

That said Driftwood and Turn have continued to circle around on my listening over the 21 years. 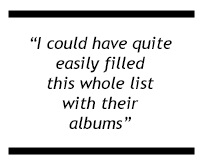 AC/DC - Back in Black

I really can’t say enough about just how much I love AC/DC. In fact, I could have quite easily filled this whole list with their albums - and there’s plenty left over that I’d like to include!

The band has had such a massive influence on my life. And when I look back on things, they’ve influenced my whole music taste. I actually thank AC/DC in the acknowledgements of my novel, HellCorp, for the extent of influence they’ve had on me. Not sure if they got that note though...

There’s nothing I can write about this album that’s not been said by much brighter people than myself. It’s a stone-cold classic. And for good reason too. It went on to define the band at a time when everything looked to be at their bleakest for them following the death of singer Bon Scott.

I sometimes think that with a band as big as AC/DC and an album as well-known as Back in Black, it feels like a cop out to pick it as one of my favourites and influential. But it’s still a wonderful album from start to finish, every track is a nailed-on, out and out rock classic. And I’m pretty sure it was the first album that I listened to all the way through thinking - “you know what, this is just great”.

Various - The Indestructable Beat of Soweto

This is probably the most recent addition to my list. I’ve made a song and dance (pun intended) on Twitter about listening to Rolling Stone Magazine’s updated 500 greatest albums of all time. It’s thrown up a lot of VERY different styles, bands, artists and everything else. And I’ve listened to a LOT of music I wouldn’t ordinarily have given the time of day. Which is, of course, a good thing.

The Indestructible Beat of Soweto features fairly high on the list - at number 497. Which means I got to it pretty quickly. And I was, quite frankly, blown away. The different sounds, rhythms, harmonies, everything really completely took me out of my comfort zone of music.

The mag rather blandly describes it as “Full of funky, loping beats and gruff, Howling Wolf-style vocals” - which really doesn’t do the album justice. It’s fun, uplifting and a genuine cavalcade of sound. And it’s immediately endeared itself to me - so much so that it’s on this list!

This is a special one. Again, there are so many great Beatles albums, songs, bits of songs, sniffs of songs, spin-offs of songs, everything associated with the Liverpudlian pop rock combo. I think the White Album stands out for me as it comes at a crossroads for the group. Time is running out as much as tempers are by 1968 and this album feels like a bit of a tribute to all of that madness and hype that had attached itself to the group. If indeed, you could still call them that by this point. You know it’s bad when Ringo quits!

While I’ve never really been a huge Beatles fan for the majority of my music listening life, I’ve found myself drifting ever more closer to them the older I get. And The White Album always feels like a lovely, comfortable fit when I want to listen to the Fab Four (god I hate that term - it’s 60s cheese at its smelliest).

I’ve always been drawn to bands when they’re on their way out. I don’t know if it’s some therapeutic dramatic irony or I’m just a glutton for punishment. But the tensions and usually the brilliant stories surrounding the making of tracks and albums when the shit has well and truly hit the fan always fascinates me.

One of my favourite stories from the making of the White Album is John Lennon’s utter hatred for Ob-La-Di, Ob-La-Da - McCartney’s ode to ska music. Describing it as “granny music shit” feels like a wonderful epitaph for almost everything that’s going on surrounding this album. And as it happens, this is far one of my favourite Beatles tracks. 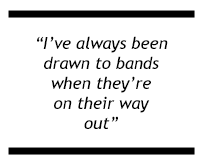 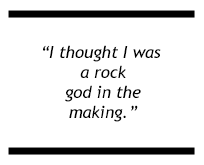 When I was a late teenager and in my early-20s, I thought I was a rock god in the making. And there were two central figures in my inspiration for that - Angus Young of AC/DC and Jimmy Page of Led Zeppelin. To the point where, in a fit of hungover madness, I actually BOUGHT a cherry red double-neck SG. As it happens, the guitar sat in storage in my parents loft for almost a decade while I moved around. But it now takes pride of place in my study, watching me all the time as a reminder to my pseudo-Bohemian yoof.

While I love the majority of Led Zeppelin’s back catalogue - I’ve actually always shied away from their most popular work. Albums I - IV are great and all - (NO Stairway!) but the subsequent releases are filled with little nuggets of brilliance as all four members came into their own as musicians and everything else associated with the group.

Presence has the perfect Led Zep sound for me. While there’s none of the acoustic peppering of previous albums and a lot of the theatrics are stripped away - it’s chock full of hard driving rock. Which is remarkable when you consider the group were very quickly heading towards the twilight of their careers together.

This was a perennial favourite in our flat. And whenever I listen to it again, I’m transported back to that time you can aptly describe as my “Who did you think you were?” phase.

Do you ever surprise yourself when something awful happens to somebody you don’t know? When Bowie died, I was absolutely bereft. Which is all the more strange when you consider that I’ve never been a MASSIVE zealot of his work - unlike others.

I was working when the news dropped and there was a palpable silence around the newsroom. I think a lot of people were just completely shocked - that somebody who has become a part of the cultural fabric for so long was now suddenly gone.

Again, there’s nothing my two cents can add to what’s already been said, recorded and listened too about Bowie. The man was an enigma, a once in a lifetime talent that tapped into the creative longing every one of us wishes we had. He was both human and extra-terrestrial all at once. Which is still remarkable and often imitated by bands and singers much too young to remember his glory years.

Let’s Dance makes my list as it’s the earliest I can recall ever hearing Bowie. My dad remains a huge David Bowie fan and I always remember him excitedly awaiting new releases while I grew up in the 1990s. I also seem to recall there was ALWAYS a Bowie album in HMV/Tower/Virgin in the listening stations - which I pretended to know what was going on to.

I love the deliberately commercial feel of Let’s Dance. Another of those albums that’s filled from front to back with genuine classics. And while it’s not the most art-house, high-brow of Bowie’s discography (far from it actually) - that doesn’t matter. It’s fun. And music is supposed to be fun, right?

Again, unlike some of the other albums on this list, this is a relatively new addition. It’s Randy Newman, retelling the Faust legend, in a musical, that debuted in the 1990s, with the likes of James Taylor, Bonnie Raitt, Elton John and Linda Rondstadt. Have I sold you on it yet?

This is just as bonkers as it sounds. And it has all the grandiose production and glossy celebrity goodness of a Broadway musical that you would expect.

A friend of mine introduced me to this shortly after HellCorp came out in 2018. And I was hooked right from the start. Newman isn’t normally a go-to artist for me, sometimes his self-deprecating scepticism is lost on me. But this feels like a pitch-perfect. It’s hammy, overblown but also touching at times too - Elton John’s ode to the horrors of war in Little Island is as breathtaking as it is heart wrenching.

One of my favourite parts of writing my HellCorp is the relationship between The Devil and God. And that back and forth of dialogue that I have them engage in is a usual highlight of the process. That love hate/hate hate relationship is really at the core of the books (along with a juicy whodunnit). And this musical/album really taps into a similar relationship between good and evil.

This one is easy. How many albums do you know that once featured an actual, working zip on the sleeve? Exactly.

The Rolling Stones have become a greatest hits band - and there’s even an argument to be made that they were ALWAYS that. With that in mind, Sticky Fingers was the first time I actually sat down to listen to a full album track by track. Now I KNOW that this features Brown Sugar, Wild Horses AND Sister Morphine - and those are all time RS classics. But I’ve always seen this as the least Rolling Stones-y album and bit of work the group ever produced.

And did I mention the working zipper? There used to be a working zip on the sleeve.

Jonathan Whitelaw is an author, journalist and broadcaster.

After working on the frontline of Scottish politics, he moved into journalism. Subjects he has covered have varied from breaking news, the arts, culture and sport to fashion, music and even radioactive waste - with everything in between.

He's also a regular reviewer and talking head on shows for the BBC.

His latest novel - Banking on Murder, follows the hugely successful The Man in the Dark and HellCorp. His critically acclaimed debut Morbid Relations was released in 2015. 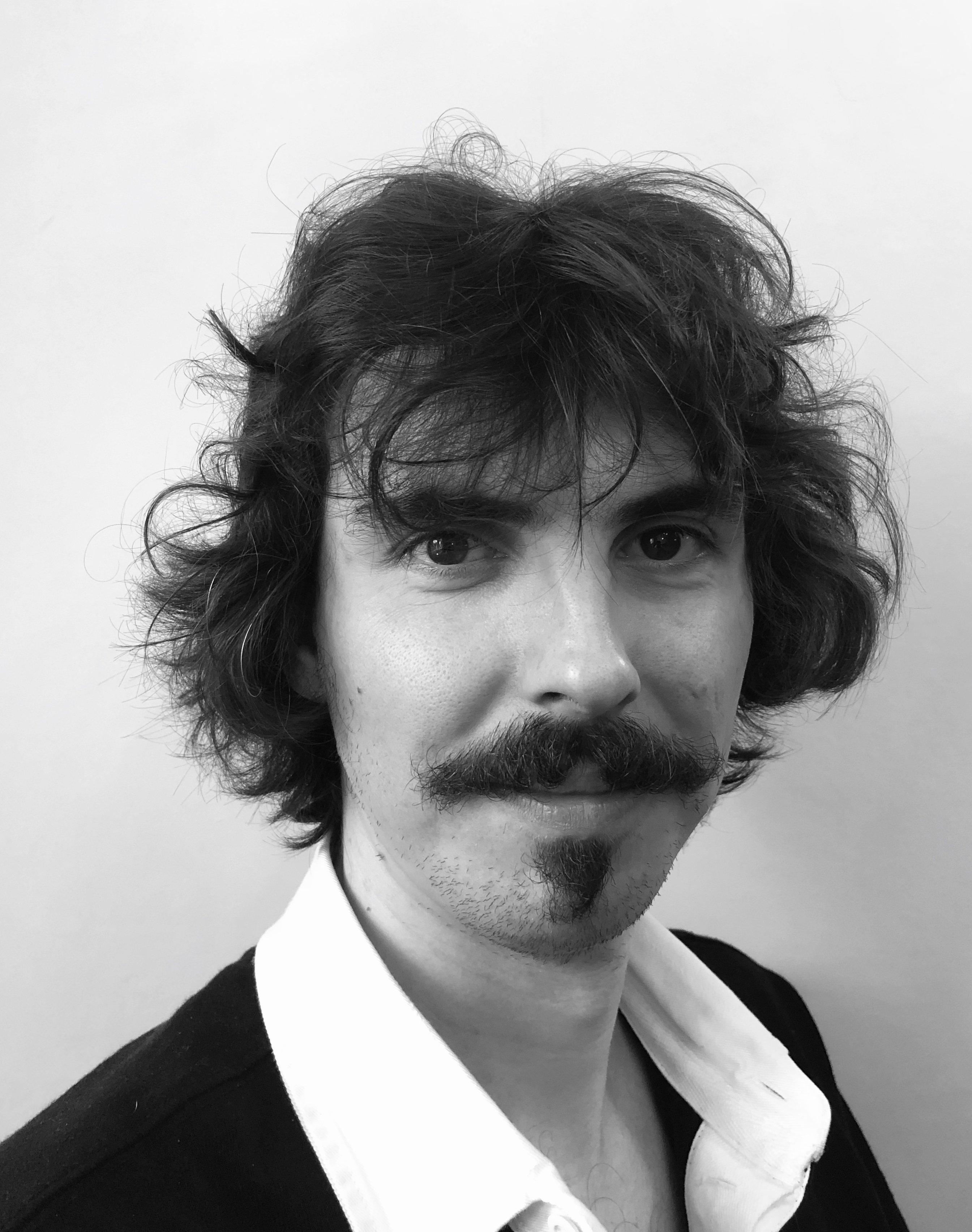