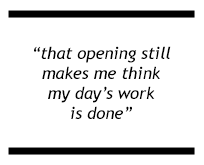 Like many who grow up in provincial towns, growing up in Preston in the 80s and 90s I was a kid in search of an identity. I wanted into ‘something’, and then Oasis happened. Definitely Maybe might stand the test of time better, but Morning Glory had a fnar-fnar title which made it more appealing to a 15-year-old boy.

I had a milk round, and Roll With It was up against the cerebral musings of Albarn and the Cheesemakers in that weird North v South marketing pl- Battle of the Bands episode. Radio 1, I got to choose the cart radio station for the drive home from our last delivery, played Roll With It wall to wall and that opening still makes me think my day’s work is done. It being the standard for ‘our’ music in the eyes of the charts, made it sing more loudly to this northern kid with curtains with the most severe parting seen since Moses was last at the seaside.

Took me ages to get my hands on the album, saving up a bit at a time from my milk round. I was doing work-experience with the Lancashire Evening Post, a couple of days with reporters at Preston Crown Court. I got into town early one morning to HMV to get my hands on the cassette. Jamming it into my Walkman, earbuds, cold with the gale blowing down Fishergate on a slate grey morning, buried deep into my lugs and turned up to 11. I walked the long way across town and swaggered confidently into the court building that day, Champagne Supernova jangling in my ears, a little bit deaf but on top the world.

I then sat through the summary and sentencing of an aggravated GBH case. Child employment protections were a different thing back then.

When we moved back to the North West, I worked freelance from home - back in the day when ‘offices’ were a thing. Working from home is great, it allows me to plow through podcasts and playlists and maintain my biscuit addiction.

2014, and working from home meant the at-the-time home workers platoon that tuned into Radcliffe & Maconie’s 6Music slot. I’d not realised just how many home-working creatives were active in the UK until then. Never one to miss becoming a cliche, I had RadMac babbling away in the background.

One day they played Water Fountain, and it snapped me out of whatever it was I was editing. In the post-record chat, Stuart Maconie referred to Merrill Garbus as ‘a bit of a character’. With the people he’s met, listened to and talked about, for someone to stand out in that crowd, and with that voice was enough for me. Straight onto YouTube.

Tuneyards are fascinating, sharp lyrics I’ve ever heard, Swiftian in parts, and amazing hypnotic sounds. Nikki-Nack is a hell of a ride, Water Fountain rattles you in, the ethereal crescendos of Time of the Dark, Hey Life chucks you out the other end in a bundle of joyous percussion and Why Do We Dine on the Tots needs to be heard for yourself. The more you get to know them, the less you know and as their music challenges you, it’s well worth disappearing down a YouTube hole. But for working from home, I would never have come across The Tuneyards, it’s not all bad.

The Proclaimers - Sunshine on Leith

Riding the wave of the end of Tory rule and the Scottish Parliament’s reinstituting, Scotland was buzzing in 1999 - probably excited that I’d moved to Glasgow to attend one of its fine seats of learning. Probably.

Scottish indie and Travis was everywhere, capped by their charming Glastonbury with Why Does it Always Rain on Me. Countless nights as a fresher featured a less than tuneful belting out of that during the year. I’ve never felt particularly English, patriotism doesn’t sit well with me, but there wasn’t really a choice that November as England drew Scotland in the play-offs. All good natured until my mate walked into a pub post-England victory in full Three Lions regalia.

Anyway, all that’s to say that the Jazzwegian sound never stuck with me. Although living on the west coast, I was at the other end of the M8 pretty regularly, and ended up living in Leith a few years later. During this time I got acquainted with The Proclaimers, beyond the bespectacled wedding-anthem band of 500 Miles.

The album’s narrative swithering between the escapades of young men to bigger political themes keeps it near the top of my playlists. Cap in Hand still gets blared out fairly regularly in the car, giving that less than tuneful voice developed in Glasgow’s hostelries another airing.

I don’t know how many reading this are football fans, but even if not this album provides one of the more religious experiences of a song belted out in unison. Not the tired You’ll Never Walk Alone, or overtures of Blue Moon. To hear Sunshine on Leith belted out by 10000 Hibs fans, as I often could from my flat as if it were a singular lament in the room with you, is a bizarrely emotional event.

I’ve cried in clubs on fewer than a handful of occasions, and even fewer that I can remember where I was at the time.

Jeff Mills, Riverside Social, Glasgow, summer 2002 (or maybe 2003…?), ten to fuck knows when, long, long lead in echoing around the sound system, teasing, tempting. Home crowd tune... is that..? Are those strings…? That’s the slide in! … isn’t it? That’s, yep, YESSSSSSS! Big drop. Glasgow’s own Silicon Soul, Right On.

Minnie Riperton - Come To My Garden

You know those people who know what they want played at their funeral? Can answer in seconds when someone asks ‘what’s the best song ever?’ Know what their first dance will be from the age of 15? Yep, I’m not one of them.

And then Jude goes and says ‘yes’ when I ask her to marry me and all that insouciance is no use to anyone. We had a think about the first dance, safe in the knowledge that whatever we went for, nervously shuffling about the floor under the gaze of 100 people means we’d not hear a note of it anyway. Choosing the song, Les Fleurs, was the easy bit. Not quite sure how it came about, but we ended up booking in some dancing lessons to make sure we nail that key moment in proceedings. We spent Monday nights of a hot, sticky early summer at a dance school at the Gorse Hill end of Old Trafford above a Spar. Jude was convinced the dance teacher fancied me, but I’m pretty sure he was just blown away by my butterfly-light movements, natch.

That arrangement on Come To My Garden, that voice on Close Your Eyes, that lyric ‘Inside every man lives the seed of a flower, If he looks within he finds beauty and power’. Beautiful.

The Beasties have stayed with me since forever, and I constantly come back to them. I don’t know why, but whenever I come back I get something new out of it. The craft, the lyrics, the production, the evolution of the, mainly middle-class, white boy brats into a considered trio of rappers and producers whose interests and influence stretched far beyond the studio. Life will visit plenty of opportunities to grieve, so I tend not to bother with celebrity deaths. However, when Adam Yauch died in 2012 it sat with me for a while, probably because he and they had been with me for much of the previous twenty years.

Could have chosen any one from four or five albums, but Ill Communication is a magnificent, almost arrogant, flexing of their powers, an act truly at home with their qualities and able to deep dive credibly from the vibes of Get It Together to the raw energy of Tough Guy to the sheer lunacy of Sabotage - also the finest video committed to film of any song.

Such was the excellence of their lyric in Sure Shot that it inspired my own short-lived, but hugely successful foray into hip-hop mc-ing while working on a volunteer programme in Limpopo Province a short drive from the Zimbabwe border. Don’t ask. 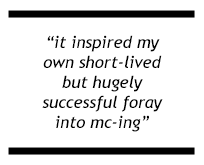 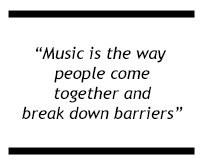 Every so often you come across an album which reinvents what music is capable of doing. This was that album for me, a heady mix of house, disco and hispanic rhythms all held together by a healthy dollop of New York soul.

As I was exploring house music more and more, I got very stuck - still am - on Masters At Work, whose body of work stands in the highest of high tiers of the genre. They’re also the perfect answer to music snobs who don’t think electro is ‘proper’ music. Give this album a listen and then come back to me. Bringing together Tito Puente, Jocelyn Brown, Roy Ayers, George Benson, if you don’t like, no love, this album, then I’m sorry I don’t think music is for you, y’know. It sweeps along, Black Gold of the Sun picking you up and before you know it you’re out the other end, happier, smilier and looking on the sunny side of life. Peaking with Runaway, La India’s voice so rich, so mellow so strong, just a genuine delight.

Music is the way in which people from different places and cultures come together and break down barriers. This album is the perfect distillation of that.

When I first heard this album it shouted lazy afternoons, big armchairs, a good book, a drink. Then I actually listened and it’s anything but. An iron fist in a velvet glove.

I first got into this during uni days, it’s classic student fodder. Horizons widening and feeling less naive, it was also the run up to Iraq. At the outset, as conflict seemed inevitable, I’d been resignedly supportive, it’s happening, there’s likely to be a quick resolution and British industry relied on deep fossil fuel resources. And then quickly and horribly changing my mind as the premise fell apart and the idiocy of British foreign policy was laid bare.

I love this album for its wisdom, it’s capacity to educate the listener without hectoring, for being such a beacon of Marvin’s genius in more ways than you could count. And I love this album for how it took on massive subjects, that ought really to intimidate a mind, and wrapped it up in a concept that experimented with what a listener could receive. Exactly what art should always strive to do.

Mike Murphy is an editor, producer, and publishing nihilist. He lives in Manchester where he spends his time lamenting Everton’s inability to avoid potholes, being bullied by his pre-school kids and plotting a legit northern publishing business. 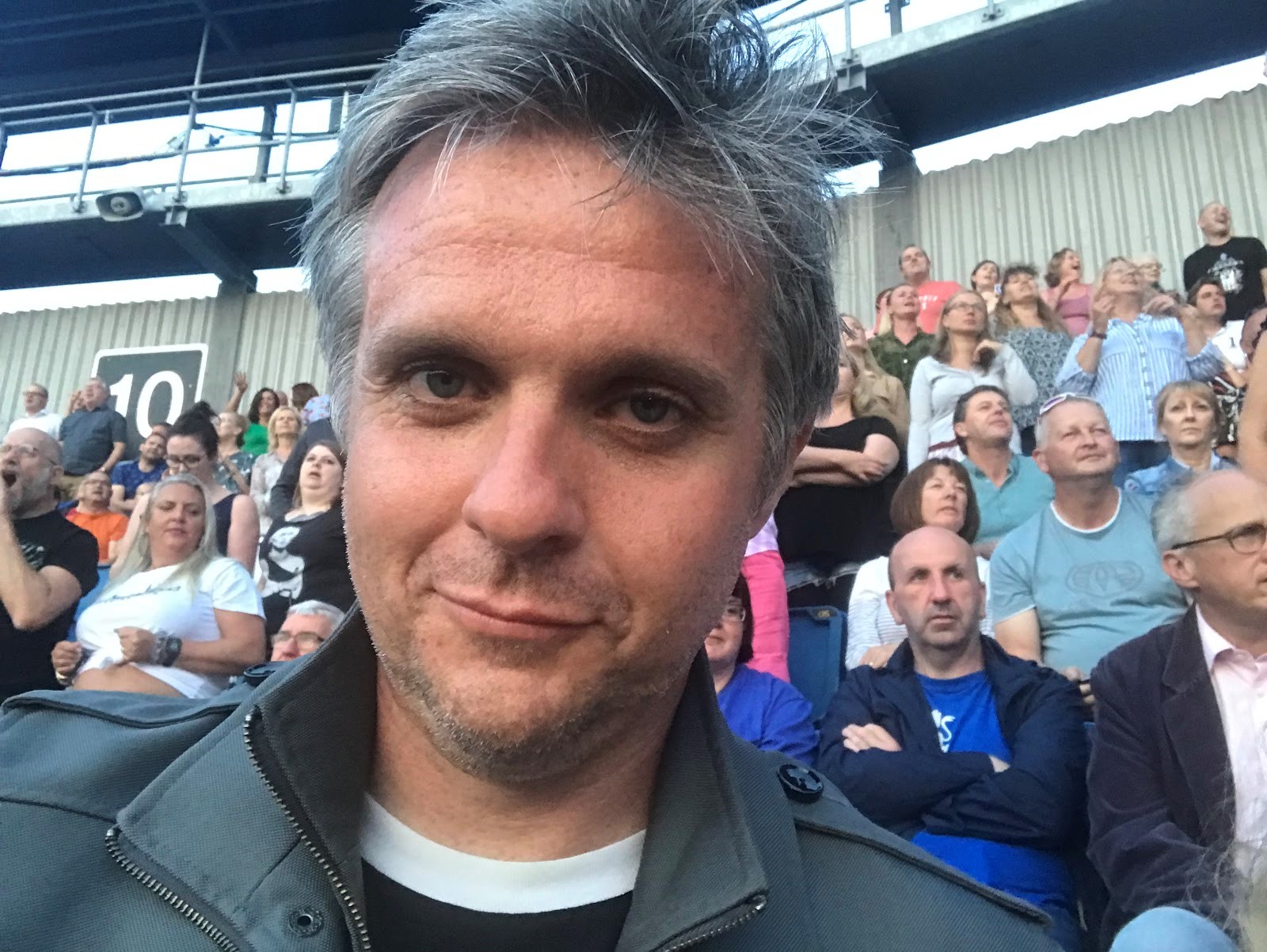