The title track came as a revelation to 13-year-old me, the swirling strings an unexpected development of Radio One’s Tamla Motown Wall of Sound fare, the gospel sentiment unrecognised as such, but responded to in that spirit all the same. School-friend Kate lent me the LP which takes the single’s name and for the first time, I ‘got’ the album experience. The clunk and whirr of the ancient mono record player I’d soon save up and replace with a stereo system (more than 50 years later, I still own the Wharfedale speakers), the crackle and hiss of needle meeting vinyl, the delight of one gem following another, of Cecilia and So Long Frank Lloyd Wright (who knew he was an architect?) sliced between El Condor Pasa and Keep the Customer Satisfied, the lift and flip and discovery of a whole second side, soon-to-be singalong, living the dream of being The Only Living Boy in New York. What a surprise it was to discover that Simon is a surname and how I grieved when I learned that Song For the Asking is a musical attempt at reconciliation between the two artists, that there would be no more of them as a duo.


Released in 1969 but only discovered by me in 1972, Nick Drake’s mournful and gentle Time Has Told Me woke me to the idea that there are other sensitive souls out there, tragically so, when two years later at 26 years old, he took his own life. I’d just learned to roll my own cigarettes and the album title which referred to the little pink slip that appeared close to the end of the Rizla packet spoke to me and made me feel included. Alerted to the idea of thoughtful manhood in the way that my single sex grammar school and avid reading of teenage romance stories in Jackie magazine had ill-prepared me for, I wanted to get to know this delicate young man, wanted to tell him how his music filled me with a melancholic joy I myself had scant ability to put into words.

Neil Young - After The Goldrush


‘Look at Mother Nature on the run’, sang Neil Young back in the days before global warming has left us on the tipping point of ecological disaster. His rough-edged voice, always on the verge of cracking, took me to West Coast USA in my west London suburban bedroom, led me to regale my long-suffering parents and neighbours with the newly-discovered notion that Only Love Can Break Your Heart.


Long Distance Love was the anthem of my twentieth year, a rock lament for the uni-student a long way from home and boyfriend, adrift in the world and not that ready for the serious business of making a living or settling down. The incomparable voice of Lowell George rising above plangent slide steel guitar brought me back to London’s Hammersmith Odeon in June 1976, where he and his band electrified the audience and I knew every word. His death from a heart attack brought on by an accidental cocaine overdose in a Twin Bridges hotel almost exactly three years later left the music world a sadder place, and me with yet another lesson that life is short and you’d better be Willin’ to enjoy the ride while it lasts.


This was the upbeat album of my second year at university, sharing Rose Cottage, Framingham Pigot with friends Chris, Eva and Didi and, for a while, RC the cat who arrived out of nowhere and adopted us. It was the winter I learned to get dressed and undressed under the covers, where walks to the Gull pub added up to my social life, where publican Stan held court at his corner bar, taking orders for beer kept in a back room and referring fondly (I think) to ‘our students’. Cor blas’ me, but they’re rummuns, he’d proclaim, referring maybe to our beaten up second-hand cars, to our dungarees and Kickers and uncut hair, maybe to the ‘modern’ music blasting out into the Norfolk countryside, to Songbird Stevie Nicks telling all to Go Your Own Way. She appeared petite and fey on the album cover, the epitome of the kind of sexy cool that I, as a dreamy and graceless pretend-hippy, could only ever aspire to.

The Pogues - Rum, Sodomy and the Lash


The wild Irish spirit strutting out of this album represents my footloose late twenties, wild (in my world) days of drink and recovery, while somehow holding down a job beginning to bore me. Several tracks featured on friend Kevin’s Irish mixtape, essential listening on several road trips to Ireland in my new partner’s beat-up Ford Fiesta. The Wild Cats of Kilkenny screamed out on mostly empty country roads, alongside The Chieftains, The Wolfe Tones and Christy Moore at Lannigan’s Ball.


Just over a year after the release of this album, my first daughter was born. The irrepressible joy and Latin energy had been the accompaniment to my pregnancy and in those sleepless days and nights following her birth, I dandled her, rocking her to the rhythms and dancing through the summer that marked a turning point in my life.

Top track, Volare, I heard and sang as Paul Harley, the man I’d coupled up with and who I married ten years and two more children later. I knew the words, the sounds, in Spanish, though I didn’t understand more than a few. Checking the translation now, I see that volare oh, oh is to fly and cantare oh, oh, oh is to sing.

And the fast-stepped rhythms indeed have the sense of soaring, gliding through the cloudless skies and bright futures that every parent wishes for their baby.


What’s happened to the women? To Carly Simon (Anticipation 1971)? To Carole King (Tapestry 1971)? Annie Lennox as one half of The Eurythmics (Sweet Dreams 1983)? Joan Armatrading (Back to the Night 1975)? Patti Smith (Waves 1979 and Horses 1975)? Sinead O’Connor (Universal Mother 1994)…? Singer-songwriters all, their power, their energy, both comforted and gave me something to aim for in a grown-up world I still didn’t fit into. If I were to choose one and one which endured in the sense that I don’t associate it with a specific time or person, but think of it more generally as an album that I’d return to again and again across the years, it might have to be Joni Mitchell - the packed poetry of her lyrics, the poignancy and the private joy of singing along with songs familiar as my skin, and ‘being’ her poised at her piano, earnest, talented, a consummate performer. Does this have something to do with having, as a callow 15-year-old, been part of the audience for a BBC In Concert recording? She was real and ordinary and fallible. More than anything, I remember her laughing when she fluffed the piano intro to a number, asking to go again.

Clunkily inadequate as a pianist myself and with a tuneful but middling singing voice with little conviction or power, Joni Mitchell has always been an alter-ego, someone with the vocabulary and confidence to express her thoughts and feelings in a way that I had never allowed myself. For me, hers is music as escape from self, a comfort and a friend. She sings that Songs are like tattoos, you know. / I’ve been to sea before, / Crown and anchor me, / Or let me sail away, / Hey Blue. Is Blue a person or a state of mind, a melancholy? One thing is certain. Songs get under your skin and they stay with you.


Ex-Londoner Barbara McKeown lives in Norwich with her husband. Since retiring, she’s completed a crime novel set in Norwich and is writing another. Below, the family album collection… 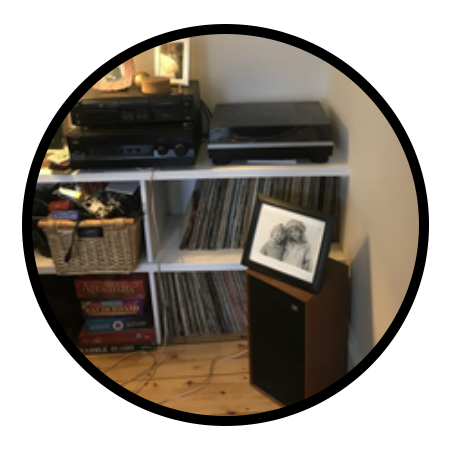