This album reminds me of a family summer holiday in 1974, driving in the Scottish Highlands. My mum and dad had a cassette of the album and it seemed to be playing constantly in the car.

Karen Carpenter’s voice is one of the most stunning things I have ever heard, and I love The Carpenters to this day, and every time I hear her singing, I remember being that eight-year-old boy in the back seat of our red Vauxhall Viva, my head pressed against the window, as we drove through country roads.

The Carpenters’ cover of Ticket to Ride is on the album, and because it was the first version of the song I heard, for years I believed it was a Carpenters’ song, rather than The Beatles. I once told this to a colleague of mine at work, who is a massive Beatles fans – I think a little bit of his respect for me died that day. 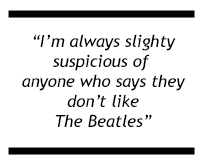 The Beatles - The Red Album

This isn’t my favourite Beatles album but it is the one that got me into them, that and the companion Blue Album (1967-70). Both of them are double albums of all their hits from those years and my dad used to have them both. I ‘acquired’ them when I moved out of my parents’ house, and I loved putting them on the music centre turntable we had in the dining room.

The Beatles are an incredible band. I’m always slightly suspicious of anyone who says they don’t like The Beatles – how can you not like at least some of the songs from that varied and wonderful body of work – and my usual retort is that they must have their ears painted on, if that’s the case.

Whenever I hear any of the songs from this album, I am instantly transported back to 1982 again, 15-years-old and hopelessly lacking in confidence at even speaking to girls, never mind attempting to ask one out, but also at that age when my whole life was stretching out like a never-ending road in front of me.

This is one of those albums which I put on Twitter as a ‘no skips’ album, in that I can listen from track 1 to 9 without every wanting to skip a track, and on the album is a track that I think is one of Duran Duran’s most under-rated songs – Last Chance On The Stairway.

Rio is a brilliant album, one of the best of the 1980s, and it still sounds as good today as it did back when it was first released. Duran Duran have never been considered the coolest band to be into – but the reason they’re still going strong today and still releasing great new music is because they are great musicians and songwriters. Their Paper Gods album (2016) is testament to that.

And when Nile Rodgers, who is the coolest man in music, calls Duran Duran his other band and is considered the fifth member of the band now, that’s as good an endorsement as you’re going to get. 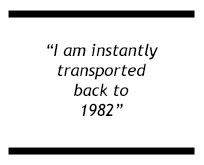 What I love about music is that you can so many different types of music and genres, and sometimes it depends where and when you hear a song as to your reaction to it. So, I think it’s possible to love Duran Duran and The Smiths – I did back in the 1980s and I still do now. The Smiths were an incredible band and their first album is one that I still listen to regularly. They sounded so different from the synth pop/New Romantic bands of the early ‘80s, which I still loved, and as soon as I heard This Charming Man, I was completely hooked.

I think the first time I heard that song was at Level 8, the student union at Strathclyde University in Glasgow, and so it reminds of those great days – I wasn’t a student, but I liked the music and the cheap drink – and Level 8 is also where I met my wife, Karen.

My favourite song on the album is What Difference Does It Make, which would definitely be one of the eight songs I’ll choose when I am eventually invited by Lauren Laverne on to Desert Island Discs.

I love Christy Moore. I reckon I’ve seen him between about 10 times, mainly in Glasgow but also in Dublin, and every show is as good as the last. Trying to choose one of his albums was tough, but I opted for the Ride On album because it contains my favourite Christy track – Back Home In Derry. It also has a lot of other favourites, including The City of Chicago, Ride On, Viva la Quita Brigada and Lisdoonvarna.

Christy’s music is firmly rooted in Irish folk traditions, but with a strong political element running through many of the songs, and his music is a regular soundtrack in our house. I think my wife is an even bigger fan than me, and there are many times when I’ve come home from work to be serenaded by Christy Moore.

I have been known to get the guitar out and play some Christy songs at parties (badly!). Thankfully, by the time I do, everyone pretty drunk, so they don’t notice any dodgy chord changes, and they know all the words anyway, so it just becomes a big Christy Moore singsong. 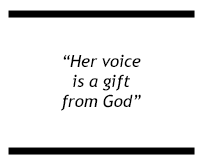 Valerie June - Pushin' Against A Stone

One of the great things about Spotify is the recommendations they provide – ‘you listened to that, so you might like this’ – and this is how I discovered Valerie June. The first track on the album is Workin’ Woman Blues, and as soon as I heard her sing the first line, I was completely blown away.

Her voice is a gift from God, and if you’re not moved when you hear the track, Somebody To Love, on this album, you have a heart of stone. For good measure, there is also an acoustic version of the song as the last track. Valerie June also has the most amazing Tennessee accent, and I could listen to her all day – talking or singing.

I occasionally plea with her via Twitter to come over to Scotland and play a gig in Glasgow. So far, she’s ignored my invitation, but I’m hoping at some point to see her live. I’m sure it will be an incredible experience.

Nebraska is a quirky film – funny, poignant, moving and strangely uplifting – and I love it. I also think it has a great soundtrack which goes brilliantly with the film. However, the reason I chose this album is that I’ve found it to be perfect to listen to when I’m writing.

When I’m not working as a football journalist, I write in my spare time – novels and short stories mainly – and I like to have music on in the background, although it has to be something that won’t distract my train of thought. Mogwai is good for that, as is some Gregorian Chant too, but the Nebraska soundtrack works best for me.

Most of the music is written by Mark Orton, either on his own, or with his former collaborators, Tin Hat Trio, and it has certainly helped me write some of the unpublished novels I have sitting in my house!

The Harrow & The Harvest - Gillian Welch

I think Gillian Welch is a great songwriter, and this is a brilliant album. She writes the songs with David Rawlings, and the music is a mixture of country, bluegrass, Americana and Appalachian influences – it is sparse and beautiful. A lot of the songs are just the two of them on acoustic guitar, and they are really haunting. For me, Tennessee is the stand-out track. I have no idea how I stumbled upon Gillian Welch – I think I heard her song Tear My Stillhouse Down somewhere and just investigated from there. I love her music and this is a great album. I got the chance to see her play live in Glasgow and, sitting three rows from the front, I was able to see her and Rawlings performing up close. It was a mesmerising experience. And since every day’s a school day – you pronounce Gillian with a hard ‘G’.

Paul Cuddihy is a writer and journalist who lives in Glasgow. He is the editor of the Celtic View, the official weekly magazine of Celtic Football Club – the only football club he’s ever wanted to write for. He has written a number of books, fiction and non-fiction, but is still to fulfil his ambition of becoming Scotland’s answer to Dan Brown. He also has a weekly books podcast, Read All About It, where guests talk about their favourite (and not so favourite) books. You can check out his website www.paulcuddihy.com 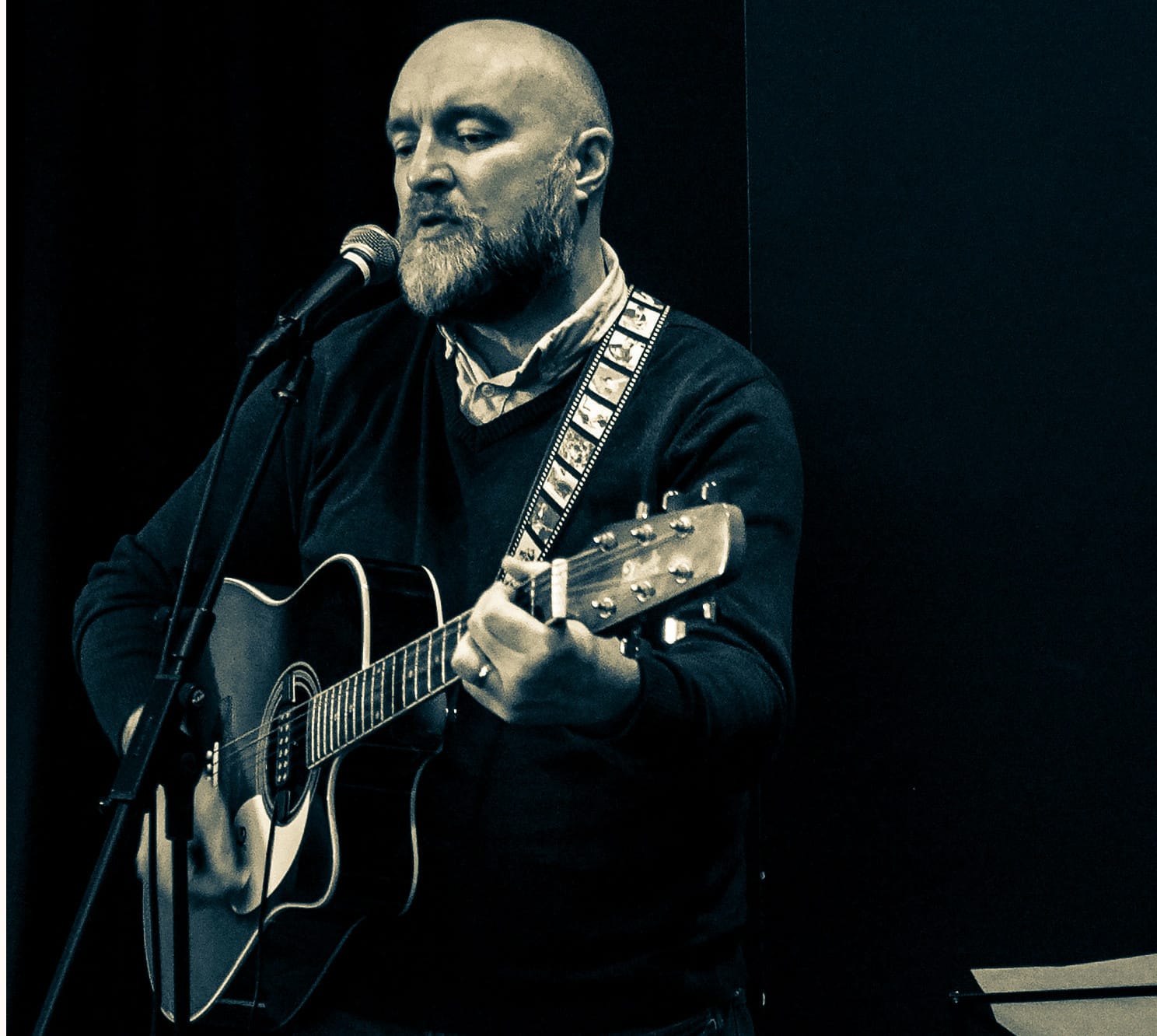