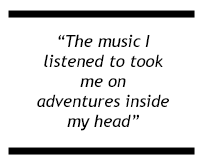 Hawkwind – In Search of Space

I would have been twelve or thirteen when I listened to this. I’d heard ‘Silver Machine’ and bought the single. It sounded like the future, all those whooshing sound effects and synths. I think my parents got me the album (on cassette) for Christmas. I lived in a coal-mining village, miles from live music or big city bright lights. The music I listened to took me on adventures inside my head. Hawkwind were heavy enough to satisfy my taste for rock music, but also had a sense of theatre and experimentation. And often their songs told stories about alternate worlds, worlds I wanted to explore. Almost half a century on, it’s an album I still enjoy. (And yes, I still have the tape.)

I was at university in Edinburgh, trying to be a tortured poet in my spare time, when I heard this. I’d liked punk well enough, but Joy Division brought something new to the table - a more downbeat atmosphere of urban alienation and encroaching dread. They fitted my world-view perfectly. I was the vocalist in a band at the time, and while our keyboard player wanted us to be Japan, Ian Curtis was my role model. Hell, we even had the same haircut, more or less! I was numb when he committed suicide. Probably even wrote a poem or two about it (fortunately lost to history). Everything about this album speaks to me, including that stunning sleeve design.

A mate I’d known since schooldays (and always respected for his musical taste) started listening to jazz in his mid-twenties. This was one of the first albums he played me, and I fell in love with that rich tenor sax sound. Coleman Hawkins opened my ears to jazz, and I’ve remained a fan ever since. His phrasing is fantastic, and by the time he is operating in a quartet (as opposed to the big bands where he’d honed his craft) he has the confidence to leave spaces between the notes and runs. He lets the music speak, rather than the musician. If I’m feeling stressed, this helps me unwind, transporting me to a supper-club in 1950s or 60s New York, the band onstage and me with a drink. Sublime.

I don’t know too many Van Morrison fans who would rate this as his best album, but it’s my favourite, for very personal reasons. After university, I moved to London and a fairly stressful, low-paid job with an even more stressful daily commute. I was trying to get published, too, and having very little joy. I worked on the editorial team of a monthly hi-fi and music magazine. One day on the way to work I had a massive panic attack. The doctor said I needed a break. I filled a backpack with clothes, tapes and a Walkman, and jumped on a train to Scarborough. Booked into a B&B and walked the blustery off-season beach with my headphones on. The tapes were a bunch of Van Morrison re-releases. I’d not listened to much of his music before, and I found it uplifting, spiritual, and full of heart and soul. I became a fan for life right there, and returned to London determined to become a full-time writer and get the hell out of the city. Thanks, Van.

So, my wife and I settled in rural France for six years and I did become a full-time novelist. It was tough at first, but it got better. Then we had a couple of kids and decided to move back to Edinburgh, where all my books were set. During those six years I hadn’t bought much new music or paid much attention to the scene. But on my return I learned about a slew of new bands and musicians who were coming to prominence in Scotland. I’m pretty sure an article in the ‘Scotsman’ newspaper mentioned Mogwai and Arab Strap, and I headed to my nearest record shop to buy their wares. ‘Ten Rapid’ is a collection of the band’s early singles. No lyrics as such, just a bunch of tunes which manage to be catchy and menacing at the same time, starting slow and quiet and building to trouser-flapping intensity. Mogwai became my writing soundtrack. In later life they added keyboards and became just a tad mellower (on vinyl, though their live shows are still intense).

My big sister’s boyfriend was a Stones fan. I, on the other hand, was ten or eleven and preferred T Rex. So I hated this when I first heard it. But it had got beneath my skin and stayed there. I bought it in my mid-teens and loved the loucheness of the lifestyle portrayed, plus the songs about drugs and serial killers and more drugs. Then, right at the end, a choir arrives and the listener is transported heavenwards while being informed by Mick Jagger that things are going to be all right, never fear. This is one of those albums that grows up with you. I hear things and appreciate nuances (and musicianship) now that I paid no attention to in my teens and twenties. It’s one of the great albums about the end of the 60s hippie dream. They played Edinburgh in June 2018 and I was there. They’re still great. It’s a miracle of sorts, really.

This is another of my chill-out albums, best enjoyed late at night, maybe with a drink to hand. And I have another schoolfriend to thank for introducing me to it. Around the time many of us were turning from prog to punk, this friend stayed true to folk, blues and craftsmanship. I bought this on his recommendation when I was seventeen, and it grew on me. Those rich vocals, the interplay between acoustic guitar and upright bass, the sense that music could transform both player and listener. There’s almost a ‘rapture’ to it. The record came into its own when I was testing record-decks as part of my job in London. It’s such a warm and detailed production that it soon told you if a hi-fi system was up to snuff. And wherever I’ve lived in the world since, whenever I set up my hi-fi the first record on the deck is Solid Air. Because it tells me if everything is in balance. 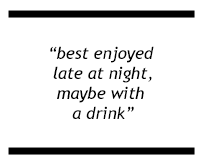 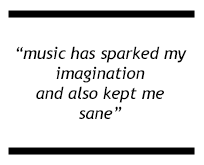 I liked Roxy Music well enough at high school, but when I got to university I spent my first year or two sharing digs with a pal who was daft about David Bowie and Brian Eno. Late at night we’d stick on Eno’s solo albums. We might gently drift off to sleep with ‘Another Green World’ or ‘Music for Films’ playing. I love those, but I love Music for Airports even more. I’ve no idea how many times I’ve listened to this album, but I’ve never written a novel where it hasn’t been playing quietly in the background some of the time. It’s ambient music personified. I can listen to it for eight or ten hours straight because I’m not really listening to it. It’s just ‘there’, shutting out the chaos of the world around me, helping me focus on the story in my head and how best to get that story down on paper. Looking back over these choices, I see that music has sparked my imagination and also kept me sane. I can’t imagine life without it…

Ian Rankin is an international Number One bestseller and creator of Inspector John Rebus. He lives in Edinburgh with a record collection and an understanding wife. His website is www.ianrankin.net and he can be found on Twitter most days as @beathhigh. 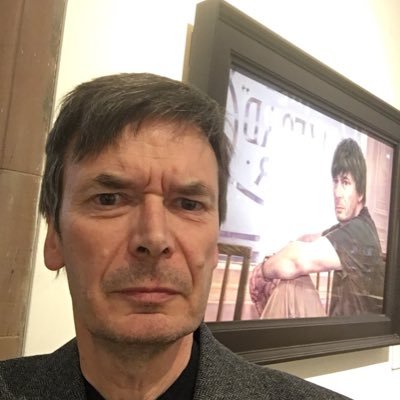