THE reason I came to the UK...I wanted to meet someone with an English accent...even a Brummie one!!

My younger sister and I were obsessed with the Monkees and we found out about the Beatles from them. Over the course of a summer holiday road trip, we learned every single word to this album.

Soundtrack to the last road trip my sisters and I had with our mom.

One of my first jobs was in a record store, selling bootlegs. I stole this from the shop and it was my soundtrack to inter-railing across Europe

First band I got to know as friends and became a gang with all their other fans. Many many many gigs attended! Some I actually remember! 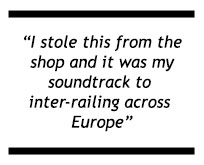 Another band I befriended and had some of the best times in my life following them around the UK with my friends.

Always a reminder of my home from home, Scotland. Must be played at full volume whenever I go to Scotland.

My adopted city’s favourite sons. I’ve got to meet Guy Garvey a couple of times and think he is a god. I totally fangirl over him!

A regular gig goer and massive music fan, Molly Williams is originally from America and now lives in Manchester after time living in Edinburgh. She works in the finance industry. Molly can be found on Instagram with the handle @missm35