Deniece Williams - This is Niecy

I didn’t have a great childhood. My Dad had left under a very black cloud and money was tight with my mum struggling to bring up three kids on her own. Buying albums was at the time out of my price range and I borrowed this vinyl LP from a boy at school named Chris Newman, the centre to my winger on the school rugby team.

It’s lost in the mists of time as to why it was never returned but I still have it now. I played it to death on one of those record players that was just a turntable. I owned a fair few singles but playing a 33 rpm disc was a new thing for me and the grooves were a lot deeper by the time I had another album to play!

I think the fact that Deniece had such a laid-back melodic voice instilled in me a love of the female voice that is still going strong today. 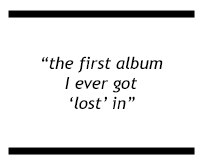 This wasn’t the first album I ever bought either, it was actually a 16th Birthday present from my Nan. I have no clue as to why she settled on this one but I’m eternally grateful to her that she did because she opened my eyes to a whole new world of possibilities. It’s happened countless times since but this was the first album I ever got “lost” in.

Music through the years has unashamedly been an emotional crutch for me. It’s provided solace in times of stress and pain, it’s soothed anger, provided times of great joy and just the celebration of being connected to great music. All of that is provided by this album, from the driving energy of Don’t Stop and the The Chain to the sheer beauty of Christine McVie’s Songbird. Without a doubt it’s my favourite album ever and I'm reasonably sure it will never be replaced at the top of that particular list. I’ve been lucky enough to see them in concert three times and each gig was a rollercoaster of emotions that I can still recall.

By the way (don’t know if I’m supposed to do this but here goes anyway) check out Lanie Gardner’s cover version of Dreams, in my humble opinion better than the original and boy does that take some doing!

I like to think that my taste in music is well rounded and eclectic and that’s thanks in no small part to a habit I got into that lasted most of my thirties. That habit was going into HMV (other record shops are available) around every payday and purchasing a random cassette from an artist I had never heard of or knew little about. This was one of the first.

It wasn’t always a success and there were many times that the cassette only left its box once but this was a whole lot different. For some strange reason I’ve always had an infinity with and fascination for all things Scottish and the clear Scottish vibe from the track listing was what persuaded me to part with my hard earned pennies for this album.

Literally the second I heard Laren Matheson’s ethereal voice on the opening track Rann Na Mona I was hooked. It didn’t matter that I couldn’t understand a word of the lyrics, I was instantly a fan of a group that I shouldn’t like but unashamedly love. This is probably my guilty pleasure among the albums I’ve picked but I don’t care who knows it!

I now own pretty much every album they’ve ever released and turn to them regularly as a welcome blanket to snuggle under when life gets a little too tough to handle. This is the one I turn to most of all.

One of the myriad mental conditions I’ve been diagnosed with is that I’m an HSP or “highly sensitive person” - Google it you might be surprised.

Alanis Morissette is also an HSP (check out her Documentary “Sensitive (The Untold Story”)) and I firmly believe that’s why this album resonates so much with me. It’s anything but an easy listen due to the raw energy and sometimes aggression that underpins it but it’s ultimately an album that is undeniably rewarding.

Talking of that raw energy it was very much evident at far and away the most intense gig I’ve ever attended. For me her charisma was intoxicating and I left the Academy exhausted. The gig was also memorable because I spent the whole of it standing next to Terry Christian. He was ultra-cool in those days...

Ironic and Hand In My Pocket were the two standout tracks as far as the Great British Public was concerned but in my humble opinion both are in the middle of the pack on an album chock full of as they say these days “bangers” - I can be down with the kids when I want to be!

Ah, The Saw Doctors. Another band who appeals to my connection with all things Celtic and probably the most joyously irreverent. Anyone who’s ever seen them in concert will know exactly what I mean by that, it was impossible not to leave without a huge grin on your face and having to wring out your t-shirt!

I remember going to my first ever Saw Doctors gig like it was yesterday. I hadn’t heard of the band but was persuaded to go by my mate Dave Hall. The result was a trip to Liverpool scrunched up in the back of an old Mini and an introduction to a band that was to become a huge part of my life. They are the only band whose home town (Tuam in County Galway) I’ve made a pilgrimage to just to say I’d been.

They’re another band where I own virtually everything they’ve ever put out but this album -their debut- is a massive favourite. It’s a joy to listen to from start to finish but underneath there are subtle hidden messages about the troubled times it was released in. If I were to be stranded on a desert island this would be the album I’d select to take with me, not because it’s my favourite but because it covers all the bases.

I was a relative latecomer to the joys of these Canadian rockers, being introduced to them by a one-time girlfriend who was a huge fan. I’m happy that she did because Rush have given me countless hours of enjoyment and release since...more than can be said for the one-time girlfriend!

I’m not normally a big fan of 20-odd minute tracks. I find most of them to be self-indulgent tosh, although before you come after me for my heresy there are definitely exceptions. “2112 Overture” which takes up the whole of side one of the LP is a notable one. I remember listening to it for the first time and being convinced that I wouldn’t get anywhere near to the end before lifting the needle but instead I was entranced and lost in the other worldly elegance of it all.

Side two was almost an afterthought at the time but when I listened to it in isolation later it stood tall on its own and cemented my love for a band whose lead singer, Geddy Lee, has probably the most distinctive voice in all of my vast music collection. Neil Peart was an amazing drummer too, God rest his soul. I’m not ashamed to say I had some dust in my eye when his death was announced. 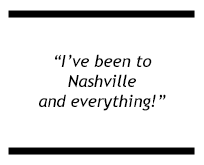 Another thing I’m not ashamed to say is that I’m a huge country music fan. I’ve been to Nashville and everything! Had this been a submission for “Ten Albums” then the other two on my list would very likely have been from that genre.

I discovered Taylor Swift back in 2007 long before she went on to make her millions thanks to her first album, the imaginatively titled “Taylor Swift” which was I suppose in hindsight a gentle fusion of country and pop with a little sprinkling of rock. Having lost touch with her music during her pleasing the masses period I was intrigued to learn that she was to release an introspective and allegedly autobiographical album during the first lockdown. My interest was peaked when I heard the track The Last Great American Dynasty on Jo Whiley’s Radio 2 show and it became the latest CD in my collection.

Now it may seem strange to include a current album in this list of my musical meander through life but I honestly believe that this album will stand the test of time much in the way that albums like Tapestry and indeed Rumours have. It’s been in the car CD since I got it, and it’s one of those albums that gives you a little more with every listen. Her lyrics on this are borderline genius in that they are so relatable and yet so obviously personal to her. I have to admit that I’ve severely underestimated her songwriting skills, a mistake I won’t be making going forward. Simply a magnificent album, and one that is destined to be an all-time great. Fickle Friends - You Are Someone Else

I discovered this Brighton-based band and this their debut album 37000 feet over the Atlantic in the new music section of the in-flight entertainment system. Natassja Shiner’s melodic lyrics had me from the first line of the opening track and by the time I touched down in Manchester on the return journey the music was lodged firmly in my brain.

Given some of the dross that graces the airwaves these days it’s a source of annoyance to me that Fickle Friends aren’t a household name. Their style is eminently accessible. They are easy to listen to despite being a million miles from the easy listening genre and some of their lyrics carry a powerful message on a subject close to my heart. Natassja has issues with her mental health much like I do but manages to convey that wrapped in tunes that are a real “bop”.

I’ve become a huge fan, and despite being the oldest person there (or so it seems!) I've thoroughly enjoyed every gig of theirs I’ve been to. In fact, their intimate gig at Phase One in Liverpool - it was supposed to be a taster for their 2020 tour - was my 2019 gig of the year.

If you take nothing else from reading this drivel please check them out. I promise you won’t be disappointed!

Keith Trudgeon is a soon-to-be Sexogenarian who lives alone in a bungalow in Droylsden. Currently unemployed (job offers welcome!) he is a self-confessed Non League football nerd who won’t have a bad word said about his beloved Stalybridge Celtic. Hates Hyde United.

Keith is partial to crisp butties, dark chocolate Digestives, Crunchies and single malt whisky. He has never been known to refuse the offer of a glass of good red wine. The only thing he runs on is coffee (black, no sugar)

Currently proud to be part of the NHS Covid Vaccine trial - Damn this virus!