Drunken Forest is every bit as intoxicating as it sounds. It is music unlike anything else committed to tape, as if a dream has somehow been tapped into and captured on record. It’s an amazing collaboration between radical Japanese artists Ikue Mori (laptop) and Kato Hideki (bass) and British guitarist Fred Frith. As a trio they don’t so much play songs as evoke a fully fledged universe. For a theatre director, an album like this is a total gift. Listening is like walking blindfolded through a forest on a different planet. Mysterious, intense but too beautiful to be hostile. I recommend listening to it in a dark room and allowing the deepest recesses of your unconscious to take flight. You will emerge from such a listen with a clear picture of the film you want to make or the book you want to write. Pure dream food for the wandering imagination.


Le Butcherettes are the most glorious explosion of punk/rock/pop/metal/ fronted by a mind-blowing Mexican singer called Teri Gender Bender. I saw them live in Nottingham just before lockdown with no idea of what to expect and they truly blew the roof off. Teri performed half the set in a green boiler suit and the second half in a bright red wedding dress and literally mopped the floor with us. Her voice is stunning. Her stage presence totally electric. And the deep intelligence of their lyrics and compositions. This is way smarter than your average punk. It’s bouncy but there is so much going on underneath the surface. I jog to this music now but I will never forget the image of Teri taking to the stage, a shy young Mexican lady thanking us meekly, and then proceeding to blow the walls off. Amazing band. I hope they become huge.


When I first moved to Nottingham it took me a while to find my feet and get a measure of the place. I felt a bit disconnected and not quite sure I belonged there. But when I first heard Sleaford Mods I realised things would be OK. If the city could produce something this good, this original, then it had to be somewhere pretty special. And it clearly was, as I stayed for 10 years.

The band are a triumph of less is more. The beats are like perfectly crafted mini sculptures. And the vocal is like music, literature and cinema all at once. Many great albums to choose from but English Tapas really stuck in my head. There are layers of emotion to it. I had it in my car in the first few years of having my young daughter. I had no idea she was absorbing it and then one day she pipes up with the lyric “you’re so dead in the head, you’ve got a job facing life.” As good an insight from a three-year old as I could ask for.


I recently moved to the North East and this great artist captures so much of what I have felt here. It’s a beautiful debut album, entirely its own thing, complete integrity. There's a great storytelling verve to the songs but also a deep sadness as the album progresses. I moved to Newcastle to do my dream job but it also happened to be a time when I was going through the biggest bereavement of my life. So the mix of feelings in the album, which I listened to a lot when I arrived, rung very true with me. I love how simple and smoky the instrumentation is and her beautifully North East voice is stunning and unashamedly soulful. Her song To Be A Young Man has to be my favourite, where she sings in the first person as a young lad full of hopes and dreams. A brilliant voice and storyteller.


This is a crazy project and I love it so much. Xordox is an entirely synth album by Australian composer JG Thirlwell (of Foetus fame). Listening to it is often like being stuck in a space invader videogame. In lesser hands it would be quite awful, but inThirlwell’s it is truly transcendent. He takes these melodramatic bleeps, beats and lazers beams and turns them into the most euphoric listening experience. I can’t think of any other contemporary artist who has tried to do something like this and actually succeeded. The resulting album Omniverse is sensational. I listen to it on headphones and wherever I am the environment is instantly changed. I sometimes chuckle imagining what others might think if they heard what I was listening to walking around town or on the metro. But this album is no joke. It is full of searing emotion and the most deeply intelligent layers of composition. It is a true space trip, and like nothing else on earth.


This was an amazing album to come out during lockdown. A choral rendition of previously mainly electronic album. It taps into the forces and folklore of weird England in a way I haven’t heard before, particularly not from an artist coming from the electronic world. Seeing this live was something else; ten women in red veils flooding the stage with their odd formations and haunted voices. Truly ancient and modern. At the time it came out I was making a large-scale audiobook of an Alan Moore novel, Voice of the fire, all about the dark mythology of middle England, so I was pretty steeped in this world. The opening track Glory is a miracle–huge and operatic, it and could have come from any century. Then there are tracks like Better in My Day which somehow capture the intensity of electronics even through vocals alone.


I love Dälek with all my soul. The roughest, heaviest, angriest most political and transcendently beautiful hip hop I have ever known. There is not an ounce of bling or shine to these sounds. The beats are subterranean, the background a meticulously crafted tapestry of ambient noise and the vocals calm, focussed and furious. This is the harshest street poetry brought to life on a bed of rumbling detritus. And yet on almost every track there are soul stirring depths and that move you against all expectation. These are truly great artists who can build such layers of sound and anger and yet within them evoke such feelings of beauty, sadness and hope. They are a profoundly unshowy band. They don’t do any hard selling. They just get on with building these immense mythic structures for the listener to lose themselves in, in their own time.

My favourite album of theirs is probably 2013’s release Absence, yet their brand new album, Precipice, I have just got hold of and feels as powerful as anything they have made. Their lyrics are mythic and forever inspiring. My favourite so far on their latest one, on a track called A Heretic’s Inheritance, is:
I hold myself to a higher standard
I don’t give a f*** if your Gods are angered.


There has never been and never will be any band like Mr Bungle. Known as the less famous band of Faith No More’s Mike Patton, it was actually a collection of artists whose individual musicianship was so astonishing that it is somewhat surprising that they could ever contain it in something as conventional as songs. But for a brief period that is what they did and the resulting three albums are totally unmatched in the rock world for the wildness of their imagination and total facility at slipping in and out of pretty much any musical genre on record. Their masterpiece is California; an album that somewhat jokingly tries to evoke the deep strangeness of that America state by taking the listener on a journey through every possible aural experience from lounge music to death metal, bebop to Gregorian chant, often within the same song.

To hear Bungle in their wildest glory you should listen to the tracks Goodbye Sober Day or None of Them Knew They Were Robots. But I have chosen their unusually straight song Retrovertigo to end this. This was them calming down a little and offering a deceptively simple rock song. But it’s packed with unexpected layers and takes a beautiful turn right at the end. Proper soundtrack to the end of the world.


Jack McNamara is Artistic Director of Live Theatre in Newcastle; one of the country’s leading new witing venues outside of London. Previous to this he was Artistic Director of the award-winning touring company New Perspectives based in Nottingham His first season for Live is now on sale and opens with the world premiere stage adaptation of Lukas Moodysson’s film We are The Best! About three friends who start a punk band in school. It runs from May 26 –June 18 at Live in Newcastle.
Tickets
Twitter - Live Theatre
Twitter - Jack McNamara 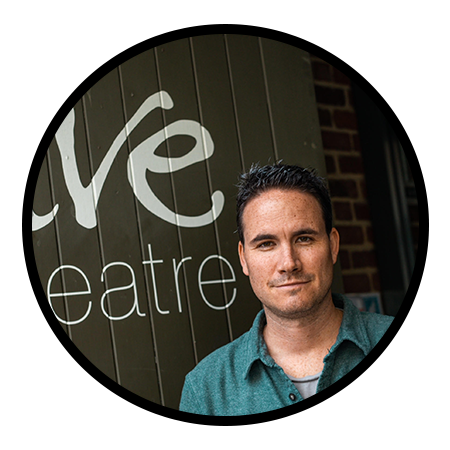