Fleetwood Mac - Tango in the Night

Little Lies and Everywhere are still two of my all-time favourite songs. Just the first bar of Everywhere puts a big smile on my face. In fact, this CD is in my car’s CD player right now. I’m not sure when I bought this album (at least 15 years ago) or who even introduced me to them. I certainly didn’t grow up listening to them, in our house was usually Queen and Wet Wet Wet on repeat.

I never actually owned this album, but my brother had it on LP. It’s the most beautiful album cover, and I would get lost staring into it. I thought he was the most beautiful man ever. My favourite tracks were Who Is It? and In the Closet. The video to In the Closet was filmed with Naomi Campbell and I remember being so jealous. I think it was the first time I’d seen Michael Jackson play ‘sexy’. My tormenting brother, of course, used to say the song was about him being in the closet.

This album is as bad as you can imagine but I bought it at a time when I was pretty obsessed with The Jacksons and anything related. (And yes, I still have it). ‘Be my loovveerrr…. I wanna touch your loving hands’. As you can see the lyrics were, erm, interesting…

This album makes me so happy. I’m transported back to being 17, working in the Trafford Centre and it being played on a loop in Selfridges. I remember thinking I was grown up and cool when I bought this album as it marked a noticeable change in me. I felt I was growing up, I had a job, independence and my S Club 7 and Aqua albums got hidden away to make way for the new ‘me’. It was the happiest time in my life. I rarely listen to it now and it’s not something I even hear on the radio. I must dig this one out.

Take That - Everything Changes

This was the first album I ever bought on cassette in 1993. I was 10 and I remember travelling into Altrincham to the big Woolworths and seeing it on the shelf. I can’t remember exactly how much it cost but it was over a tenner and at least two weeks pocket money (God, I sound old.)

I was quite late to the table with Gregory Porter. He seemed to come out of nowhere yet have been around for years before he was really on my radar. His voice is like velvet and I could listen to anything of his all day. In fact, it was playing on a loop when I gave birth, so it will always have a special place in my heart.

I bought this album for no other reason than my girl crush on Gwen Stefani. I used to study the video for Don’t Speak and try to replicate the flick eyeliner whilst wearing a sparkly bindi from Claire’s Accessories. Unfortunately, I grew up and got wrinkles (unlike Gwen Stefani) but I have just about mastered the flick eyeliner!

Emily Fletcher is 36 and lives in Manchester with her husband and son. She makes jewellery under the name Emily Lisbeth, details of which can be found below. Her work has been featured in Tatler magazine. 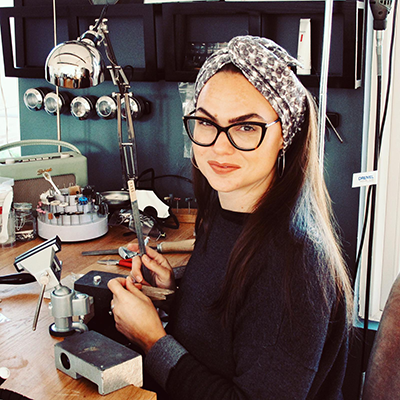