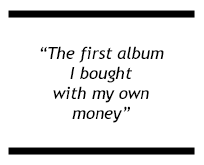 Stereophonics – Word Gets Around

This was the first album I bought with my own money, when I was 9. I saved up my pocket money and bought it on tape, as I couldn’t wait an extra few weeks to save for the CD. It’s still one of the albums I come back to regularly – every song is great. I’ve had to replace the CD twice, such was the regularity that I used to listen to it. The storytelling in the songs is great – Kelly Jones could paint such vivid pictures with his words. Same Size Feet remains a firm favourite 23 years later!

I could pick any early Metallica album, but Kill ‘Em All just edged it. I’d mostly listened to pop punk and rock until then, but hearing that intro to The Four Horsemen converted me to a metalhead. I was learning bass at the time and it was just too fast for me. It was my benchmark. My first band would go on to slaughter Seek and Destroy. Cliff Burton’s bass solo was also very inspiring to a young musician. Metallica had aggression and attitude, and they had the songs to back it up.

It’s an absolute classic for a reason. I was on holiday in Florida and I bought this at the Hard Rock café. There wasn’t a CD player in the hotel, so I sat in the baking hot car and absorbed every note, again and again. When I got home, I switched from bass to guitar and proceeded to learn every note. Smells Like Teen Spirit is the one that everyone will know, but songs like Territorial Pissings, Breed and Lounge Act are the ones that stood out to me. Kurt Cobain is one of my musical heroes. Heavier Than Heaven, a biography by Charles Cross, is one of the only books I’ve ever re-read. 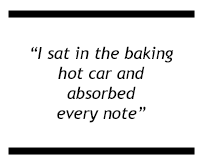 ASIWYFA are a Northern Irish band, from close to my home town. They are mostly instrumental and were different to anything else going on. Their live shows were emotional affairs and one of my favourite musical moments was seeing them at a local festival. The sun was setting, I was with a group of friends and they were playing on the main stage, not long after releasing this album. Hearing the Voiceless takes me back to that moment every time. They also have a very uplifting song called Don’t Waste Time Doing Things You Hate, which I think is great life advice! 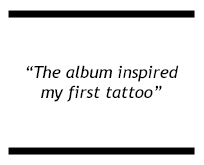 I got into Biffy Clyro when they released their most mainstream album. It was a stunning collection of songs and different to anything I’d heard before. There were loud guitars and huge choruses. There were also acoustic songs combined with odd lyrics. It’s the album that I associate with university. I remember travelling to Preston to an album signing. I was so nervous I couldn’t even talk to them, though they were lovely. The album inspired my first tattoo (my only tattoo if my mum reads this!)

I was a huge Busted fan and was disappointed to see Charlie leave. Though, upon hearing this album, I changed my mind. It was heavy yet filled with emotion. The artwork was beautiful and the songs stood up to the ambition. His to-and-fro vocals with Alex were used to perfection. It came out at a time when my group of friends were all taking their driving tests and it really reminds me of that sense of freedom. It was the first album I played on my solo driving trip after passing. I’ve seen them live a bunch of times and they’ve been great every time.

This album reminds me of the time when I first moved to England, when I was about 23. I hated the house share I was in and would spend all the time in my room, trying to keep out of their way. I heard the song No Rest on an episode of Made in Chelsea (don’t judge me) and immediately fell in love with them. They are hard to pin down to a genre. I suppose folk-rock might be it, though they are nothing like Mumford & Sons. The songs show such vulnerability and longing and I identified with it straight away in my then situation. One of the best live bands I’ve ever seen. Sadly, they spilt after two incredible albums.

Funeral For A Friend – Casually Dressed And Deep In Conversation

In our teen years, my friend’s and I all liked different music. I was into metal and they were into folk and rock. FFAF were one of the only bands we agreed on! This album was like a melting pot of all of our likes. I saw them a few years ago on their last tour before they broke up and they played this album in full. The perfect send off. The singer, Matt, has very kindly given me permission to use some of his lyrics in my third book, Roses For The Dead.

Originally hailing from the north coast of Northern Ireland and now residing in South Manchester, Chris McDonald has always been a reader. At primary school, The Hardy Boys inspired his love of adventure, before his reading world was opened up by Chuck Palahniuk and the gritty world of crime.

He's a fan of 5-a-side football, has an eclectic taste in music ranging from Damien Rice to Slayer and loves dogs. 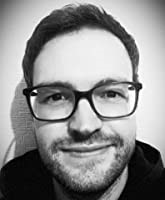