Transatlanticism is a perfect album.

I don't even know where to begin with the titular centrepiece of the album. It's probably cheap to say, but if you close your eyes, it's a cinematic saga of detachment and longing.

Queen of the Stone Age - Villains

I have been a fan of QOTSA for decades. I was introduced to reigning Rock God Josh Homme via an enduring obsession with Dave Grohl. From that first listen to Songs For The Deaf, I was hooked. I've seen them live, and it's about as intoxicating as Josh used to be on stage. I cannot explain the fever dream that Villains cast over me. Mark Ronson elevates their iconic desert sound to something fucking interplanetary. I cannot get enough.

Is there another more exciting and fucking badass career to be had than that of Trent Reznor? Undeniable and enduring alt-rock icon, trailblazer, and just quietly pivoting to the most compelling composer and sound designer working in the U.S right now. I adore With Teeth's percussive hypnosis, a perfect synergy between NIN expression's digital and analogue poles.

I remember vividly living in a townhouse with a buddy on the Central Coast of New South Wales in Australia. I was pottering in the kitchen, and my housemate/buddy/phenomenal guitarist and musician, who I'll call "The Duff", wander over to our pretty rad hi-fi set up and pumps Kid A. The opening track Everything in its Right Place blared and vibrated through the speakers, and I was utterly stunned.

I was a late bloomer to all things Radiohead. I found that their progression, with Nigel Godrich, toward a more digitally infused atmospheric sound to be all kinds of wonderful. 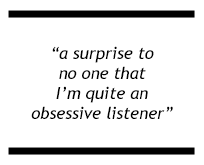 City and Colour - Bring Me Your Love

An old family friend working for Universal Music at the time brought home City and Colour’s ‘Sometimes’ record and said, Man, YOU are going to love this guy Dallas Green. He was not wrong. It probably comes as a surprise to no one that I’m quite an obsessive listener, and I found myself using this album as the score for an 80,000 word thesis on authorship, masculinity, and Michael Mann. The song ‘What Makes a Mann?’ inspired the title of that thesis.

After Nirvana, Silverchair was my favourite band growing up. Their home town of Newcastle is an hour away from where I grew up, so when my school-time best friends Marcus and Chris, all found ourselves learning guitar, we did it using their music or, at the very least, were inspired by their incredible success. While Frogstomp was the album that put them on the map and follow-up Freakshow delivered the angst, there's nothing quite like the synthesis of their punk rock roots and their musical ambition in Neon Ballroom. The first symphonic anthem, Emotion Sickness, with piano from the savant David Helfgott is a signal – hold on to your fucking hats and your hearts. 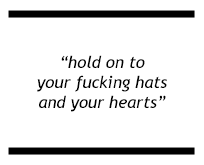 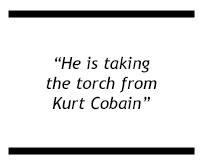 Kanye West - The Life of Pablo

Kanye West is the artist I've listened to more in the last fifteen years than any other. He is taking the torch from Kurt Cobain. He's a prophet—a true artist. Leading up to the birth of my daughter, The Life of Pablo, his first album as a father, demonstrated the craft, aspiration, exploding ambition and self-awareness at its absolute zenith. Not only one or two iconic tracks, try ten.

Imogen Heap - Speak for Yourself

The very first MP3 player that I owned was a classic iPod. I bought it with money from my first full-time job as a storeman in a DVD/video distribution warehouse. I covered a lot of ground in the double football field-sized, multi-tiered factory, carting palettes of DVDs/cardboard up long aisles bordered by towering stacks.

At the time, in my early 20s, The O.C. was a phenomenon and the ladies in my life at the time made a ritual of watching the living shit out of the world's biggest teen soap. However, O.C. music was a gateway to international indie and alt music of the time. I would still argue that the O.C's mixtapes endure while the memories of the show after the first two seasons blur into an amorphous blur. All that is to say that the final track of the season two finale that introduced me to Imogen Heap completely levelled me. A cliff-hanger crescendo that left the world looming, that needed to be rewound to be believed. There as the hypnotic sound bed was this wave of Imogen Heap's digitally enhanced prayer. I immediately sought out everything that she'd ever done. Once Speak For Yourself was on that iPod, and I could use the click wheel to get the track to repeat, there were days, and maybe weeks where I was working autonomously for every hour of the day, a single headphone was in my ear blasting Hide and Seek before relenting to the whole album. 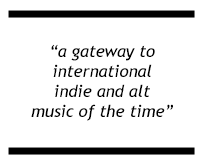 Blake Howard is a writer, film critic, podcast host and producer behind One Heat Minute Productions, which includes shows One Heat Minute, The Last 12 Minutes Of The Mohicans, Increment Vice, All The President’s Minutes, Miami Nice, Josie & The Podcats and Zodiac: Chronicle. Endorsed and featuring legendary filmmaker Michael Mann, One Heat Minute was named by New York Magazine and Vulture as one of 100 Great Podcasts To Listen To and nominated for an Australian Podcast Award. Creator of the Australian film collective Graffiti With Punctuation, Blake is a Rotten Tomatoes-approved film critic with by-lines in Empire Magazine, SBS Movies, Vague Visages, Dark Horizons, Film Ink and many more. Follow Blake on Twitter or follow the podcasts at One Heat Minute Dot Com. 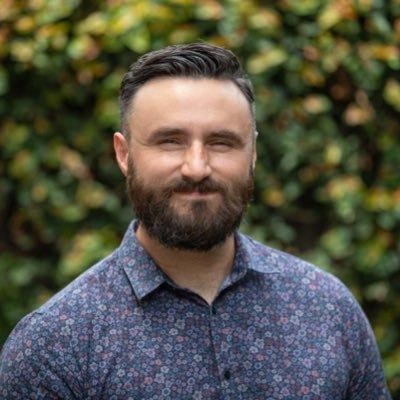